It is so much nicer to ride -- usually!

I normally go in to work around 9:30 AM. But for the past two days, I have been an early bird. While it is nice to start early and finish (try to) early, as a VC, I pay a price, because of the time at which I leave home to go to work (and on the way back too, unfortunately.

I am sure you guessed it! For what it is worth, here is a quick peek! What you are looking at is the line-up of cars on Valley Ranch Parkway caused by back-up at Valley View Lane and Riverside. It is usually not this bad later in the morning, say around 9:15 or so. 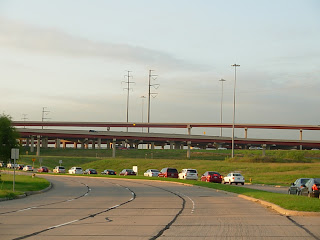 I usually don't mind these drivers' manners or lack thereof and riding along with them. While this part of my route to work is not the most challenging, the harder part is just down the road, at the intersection of Riverside and Vally View Lane. The video below should give you an idea of this craziness!

Of late though, I have been wondering, is it really worth messing with this? Should I take a saner and safer route, perhaps take the Campion Trail to La Villita, instead of trying to maneuver through this mess? That's exactly what I did this morning! 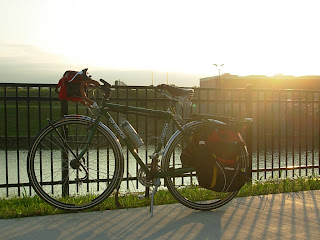 Is that better or is this better? I would like to call the picture below, "Galloping Gikma (pronounced Jikma or GCMA) :) 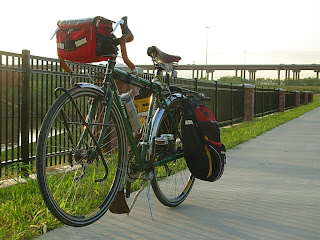 Even the safer route has a price to pay. First off, it is a bit of a detour, which is not something El Groucho is ready for in the morning. Secondly, I have to climb this 6% grade hill. Did I fess-up that I am not a big fan of hills, especially if they are on my commuting route? 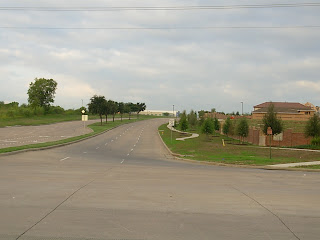 I did not mind the detour or the 6% grade this morning. I survived them just fine.

This evening's commute back home was a different story. On the same route, this evening, I came close to being hit TWICE within 10 minutes. In both cases, I did signal, follow all the rules and I am quite confident that I was visible.

In the first case, the first guy who almost hit me was driving a Caddy De Ville. I was on La Villita, headed towards Campion Trail. The two lane road becomes a one-lane road, as it nears the trail. I moved over from the ending lane (right) to the inner lane. The Caddy guy honked at me and nearly missed me; put the pedal to the metal and drove away "victoriously". I was annoyed. I made the exception and treated him to a finger. My bad perhaps, call me a donkey, but I too am human, what can I say?

In the second case, three cars honked at the Olds Achieva, which almost hit me, on Valley Ranch Parkway East (I was headed towards Cimmaron/North). Mind you, this is a 2/3 lane road and usually most people are courteous. Cyclists are almost dime a dozen on this road, on many days!

I didn't break any laws! I followed all the rules to a tee!

Another fine example of lack of education on the drivers part? Or is it the Mercury Retrograde??

Again, for someone who is not a native Dallas-ite, I say this behavior is new to me and I haven't seen much like it elsewhere :(

Y'all be careful out there!