Tubus Rack and The Tasty Treats - A Short Story!

Once upon a fine fall afternoon, a man tied a few bungee cords on this rear rock and set out to the market place in Irving, Texas. It was the first day of fall and the air felt nice and cool. The birds were out singing their usual rap music, the squirrels performing the moon walk and all that good stuff was going on. The skies were blue and clear. The man on the bicycle hummed his favorite tune and kept pedaling towards the market place. 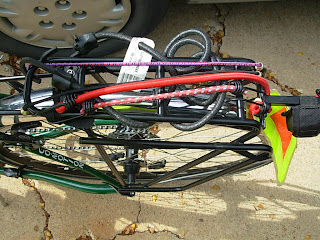 Upon getting to the market place, the man remembered that he needed food for his two starving 4-legged children. So, he went to a store that sold food for 4-legged children. Once he was at the store, he found that there was no place to park his vehicle. After thinking for a moment, he rolled his vehicle into this particular store.

Once inside the store, the first person our man ran into was the store manager. Being a person of good manners, our man decided he would ask the manager about parking his bike inside the store. So, the man said to the manager, "Do you mind if I park my bicycle here for a moment? I am here to shop at your store". The manager replied sternly, "If only for a moment, yeah sure". The man said, "I am here to shop at your store...". The manager did not say anything. So, the man asked the manager, "Do you have a bike rack?". The manager replied, "No, I don't have a bike rack". The puzzled man asked, "So where do you think I should park?". The manager said, "Out there". And our man said, "There is no proper structure out there I can lock my bike to". Then he moved on to fetch food for his starving children.

Having been to this particular store, many times before this instance, it took our man a few seconds to find what he was looking for. So, he picked up the 40 pound bag of food, paid for it at the counter and placed it on the rear rack of his vehicle and secured it with the bungee cords he had brought with him. At this point the formerly stern store manager bid him goodbye saying, "Be careful out there". 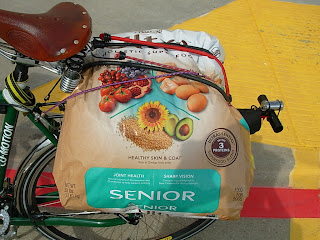 Then the man parked the bike outside this 4-legged childrens' food store and took a picture of his trusty steed. As he did that, he got carried away too much and tears rolled down his cheeks :) 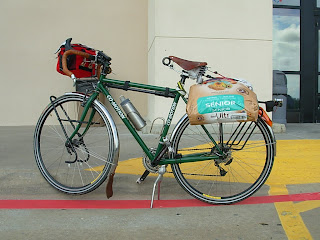 Given all this happened out in public, the man was a bit embarrassed. He took out his handkerchief and wiped his tears away. Then, he put on a cheery face, hopped back on his vehicle and rode back home. 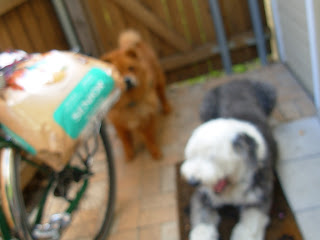 One of the children was so happy, she even posed next to the bicycle! 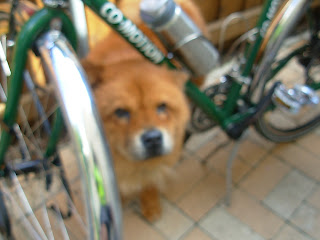 Usually, the man took good photographs. But today his old hands were not very steady. Instead of posting not-so-great pictures of his 4-legged children, the man decided to include some other pictures of his two children, which he had taken in the past. 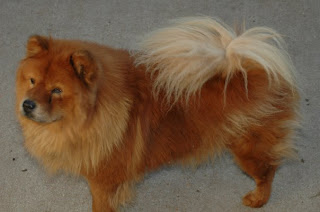 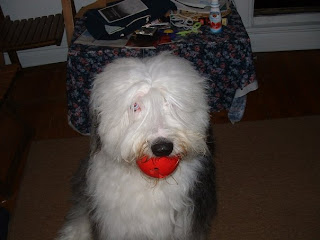 This made the children and their father very happy!

So, here is the moral of the story: