Free Shower - A Ride in the rain

On Saturday, I decided I will ride rain or shine. The weather folks had predicted some rains in the evening. There were no severe thunderstorm warnings and I said, "Heck with it", or "Yeehaw" or something like that and got on my bike and rode.
I have been carrying a little more stuff in my panniers, these days, just to practise for a future tour. This time, I also stopped at the fruit vendor on Valley View and bought 4 big California Naval Oranges, 4 Bartlett Pears, 8 Bananas and 1 Cantaloupe. These along with the 3 liters of water I was carrying loaded my rear panniers pretty well and Gikma rode like a Caddy :)
I saw many riders on the road. One of them even asked me if the MPG on my vest meant "Miles Per Gatorade". Hmmm! Not sure what to think! Naw...I am sure that fella knew MPG meant Miles Per Gallon and not Miles Per Gatorade :)

Ran across a bunch of roadies! A few of them passed me in the same line, many on the right hand side, though this was a 3 lane road. They didn't even care to warn me while they was doing it. This fellow in the picture is one of them modern bicyclists, who yaked on a phone while riding. Luckily, this was not the highlight of my day :) 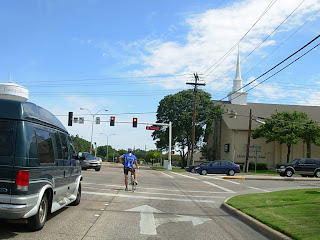 Many people was out getting their coiffeur fixed at Ray's. It was nice to see people getting out and doing things. I have always wondered if I should stop and get a haircut at this place, but time and again I have resorted to doing it myself. It has worked so far, no one has given me too much grief about it! I have thought about getting some professional help for the maintenance of Mr. B (my beard). But the thought of someone else butchering Mr. B does not sit well with me. If someone is gonna butcher Mr. B, by golly, it is gonna be ME :) 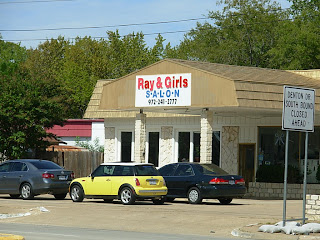 I stopped at REI Dallas to use their facilities and to browse at their nice selection of products. This handlebar basket from Topeak caught my eye. Looks really cool, doesn't it? I wonder if it comes with the produce, as seen in the picture :) 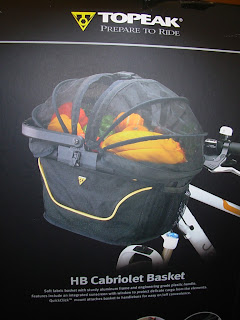 I was told by the REI bike techs that my nephew took a couple of classes there. In small  towns, word spreads like wildfire, ya know!
After REI, I rode down Northhaven through Highland park to the KT Trail. I passed by The Hockaday School. I have rode by this school several times. I never knew how fancy this place was until one of my co-workers told me about it. I read about how much it costs to go to this school. Wow!! Not even my GED cost that much! 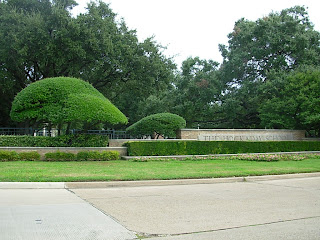 At Welch and Northaven, I ran into this fine youngun. He was only 2 and such a well mannered boy!! Did I mention I love animals? I am a bit skiddish about snakes, spiders and crocs/gators. I won't harm them, intentionally, but I probably will not have them as pets! 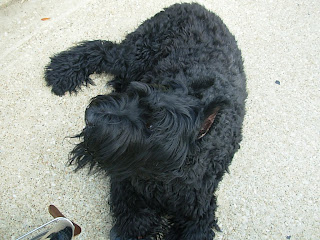 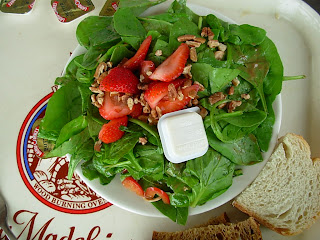 Well, a little after 2 PM, it started Seattle-ing. So, it wasn't heavy or anything, just a dull rain. As it is still warm in Dallas, I didn't bother putting on my rain gear. I left them in my panniers. Gikma and I both took a nice shower. 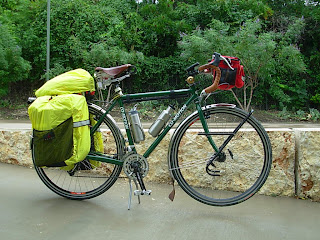 I continued riding in the rain and reached KT Trail Dallas, my destination for the day. The trail was less crowded, perhaps because of the rain. Unbeknownst to me, there could have been a Cowboys game or something! 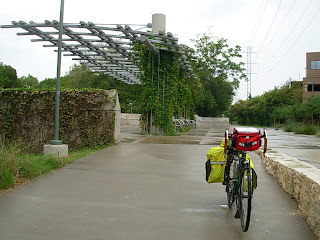 Here is Gikma in Ninja mode, trying to disguise herself and blend in with the surroundings :) 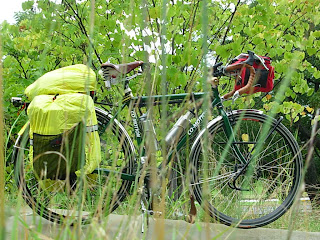 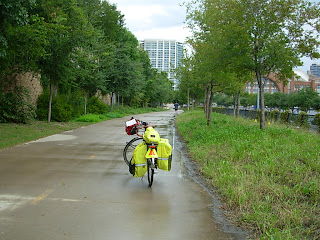 I used to take lots of pictures of flowers, nature and architecture, when I lived in St. Louis, where I lived right across from  the Missouri Botanical Gardens. I haven't taken lots of pictures in Dallas, quite yet, especially of my favorite subjects, flowers. However, during this ride, I took two pictures of flowers. I am not ashamed to admit that I do not know what kind they are (you may educate me)!
Having said that, here is pretty flower number one! 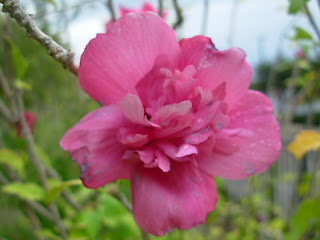 And, here is pretty flower number two! I like the way the Macro mode in my Nikon worked well in taking these two pictures. 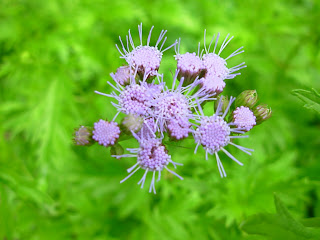 Now, I still can't figure why they have to have a billboard here? It looks so ugly and out of place! 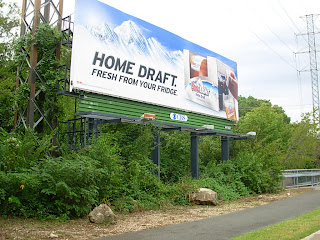 I rode till the end of the KT trail, which ends close to the American Airlines Center in Dallas. Then, rode the trail back and followed the route-in to get back home.
I tried taking couple of videos today. The first one is a peak at the crazy traffic, even on the weekend, on IH-635.

The second video, is of riding in the rain. I am still working on perfecting my "deshaking" skills. So, please bear with me :)

One thing that I saw next to REI, on my way back, was this GM/Chrysler dealership. They must have gone out of business recently. It must have been a happening place in its heyday. Ain't that terrible? 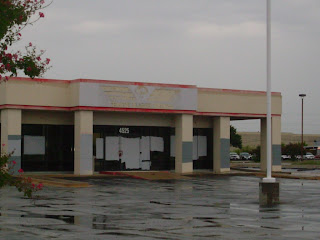 Stopped briefly at REI Dallas to fill-up my water bottles and to use their facilities before heading back home! REI was hopping! Now, that I guess could be construed upon as a sign of economic recovery! Let's at least hope that's the case for everybody's sake :) 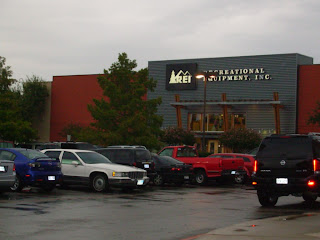