The Ride, The Peeps and Fort Worth Texas

Well, it started as a possibility and then turned into a probability and finally and eventuality and then a reality!
I am talking about the BABBLE ride that took place October 17, 2009, in Fort Worth Texas.

There are great accounts of this ride at Myles', Paul's, Steve's, Chris', to name a few.
Irving had some kind of runners' event in Valley Ranch. This event must have been something big. There were police officers at many corners directing traffic and such. One of the officers directed me not to ride in the dedicated runners' lane. A little while later, I asked another officer if I could ride in the runners' lane, given no one was running at that time, and she said, "Go right ahead". Boy was I lucky? I had  my own lane!! 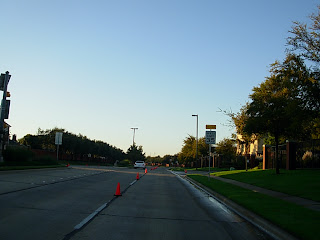 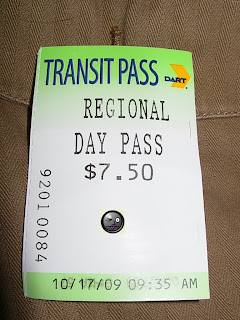 The next train to Fort Worth wasn't until 10:42 or so. That's an hour and thirty to kill. Plus the thought of all those angry cyclists waiting to kick my donkey made me very nervous :) I called Myles and Steve right away. They were nice enough to let me join them for lunch. Myles gave me crystal-clear directions to the restaurant where we were going to do lunch.

I spent the next hour and half waiting for the TRE at the West Irving Station. I had the fortune of meeting an older lady, who was extremely intelligent and great to talk to. We talked about the current state of health care, polity, food and a bunch of other topics, including bicycling. This lady was 82 and she was very disappointed in her doctor who had advised her not to ride her bike :( 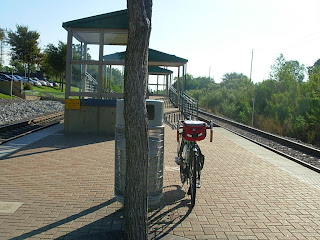 I have only lived in Dallas for about an year and a half, to date. I have taken the TRE one other time to go to Dallas. This was my 3 trip on a TRE train. As this was the Texas-OU game weekend, all the traffic was headed East from Irving and not west. So, there were only a few people on the train. 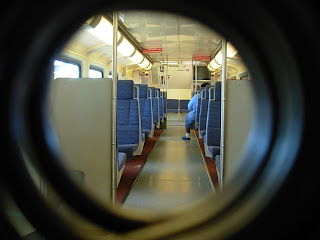 There is lots of room on the TRE to take your bike along. There are also nice and cushy seats. There is an upper level and a lower level in the TRE. I have still not explored the upper level. 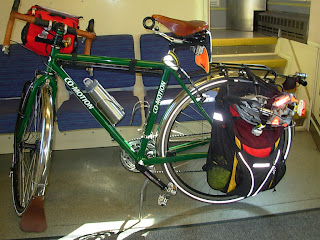 There are four stops between West Irving and Fort Worth T&P. Pictured below is the Inter Modal Transportation Center station. This station was hopping with lots of tourists. 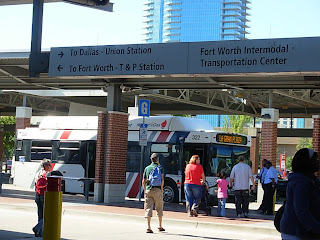 I got off the TRE at the Fort Worth T&P station. I was a bit TRE-lagged and I had to ask the one of the operators for directions out the station. Photo below - coutesy of TRE .

After I got out the T&P, I used directions given by Myles to the restaurant and the directions from my 705 as a backup. This nice paiting was on Vickery Avene. It was a Sportswear store. I guess they may be catering to the horseback riders or selling western gear. 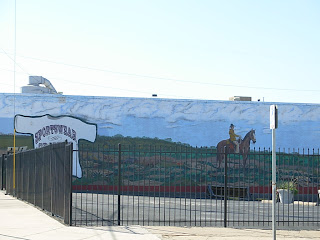 To my surprise, there were also some older looking buildings on Vickery. There was even a street named St. Louis, appropriately named, perhaps :) 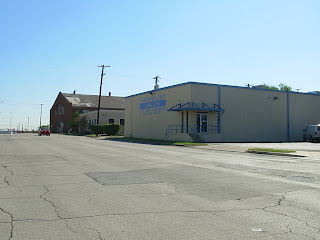 This building at Vickery and Jennings had the Dickies sign on it! I just looked it up. It is a Dickies Outlet Store! How cool is that? 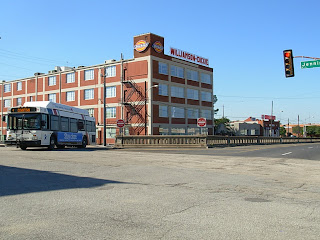 While Fort Worth did not have as many skyscrapers as does Dallas, it had some unique "tall buildings", such as the one below. 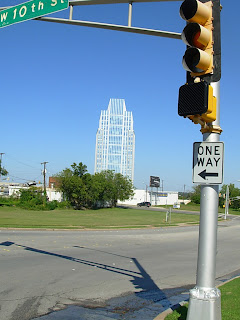 The Montgomery Plaza on 7th Avenue was a really nice looking building. Lots of history behind this building also, although the original Montgomery Ward Stores or the Catalogue is not around any more. It appears that Swiss Colony bought the intellectual property assets to Montgomery Ward in 2008. Swiss Colony is head-quartered in the quaint little town of Monroe, WI. Been there :) Brrrr... :( 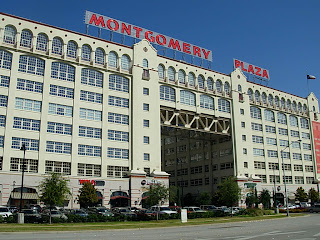 I rode west on 7th to get to Fuchs and 7th, to La Familia. Myles told me he had made reservations for 15 people there and I decided to go in and get a soda (Club Soda with a slice of lemon)! La Familia was a really nice experiece. The crew were extremely courteous and prompt. My glass was always full. The food was quite good. I would definitely go here for lunch again. 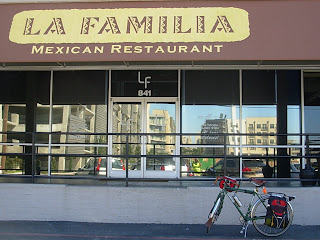 The chips and salsa at La Familia were great. I loved both the salsa and the chips. The chips were mildly seasoned with some chilli powder and the salsa was just right, not too hot and not bland. It was well garnished with fresh cilantro. Feast your eyes on this great salsa, in the next two pictures.
Salsa with flash :) 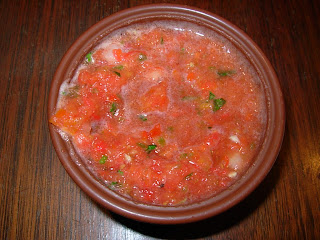 Salsa without flash! Believe me, this salsa did not need the flash :) 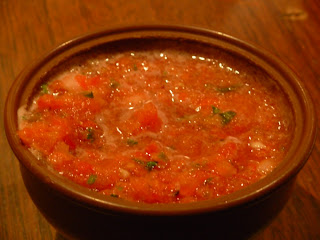 The gang showed up, after their nice ride, thirty minutes after I got to the restaurant. It was so great to meet everybody, for the first time ever, in person! There were self-introductions, Rantwick-ized group photos (we all held the Rantwick logo in front of our faces), great conversation, good food, great everything!
Special thanks to all BABBLE organizers for organizing everything so well and especially for including me in the great meet-up, even though I was late! 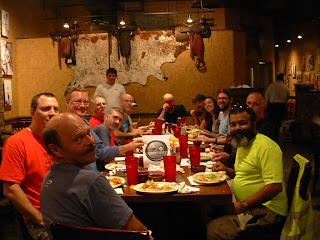 Steve and Reed shooting the spokes :) Special thanks to Steve for bring a bike with a internally geared hub (my request so I can see how these things work). 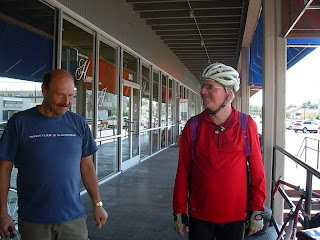 Chris posing with this fine Rivendell Homer Hilsen. Special thanks to Chris for bringing his bike with a SON and a E6 headlight. I had requested the group that someone bring a bike with a hub dynamo. 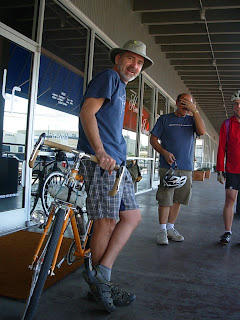 After lunch, the group split-up. Some went on to a brewery. Steve was kind enough to show I and Reed around downtown Fort Worth. So, off we went riding into downtown Fort Worth, which is quite bike friendly (based on first impressions). 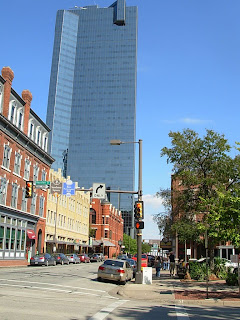 The famous Sundance Square of Fort Worth! We saw a bunch of bicycle policemen (white helmet) here. There were also private security guards (yellow helmet). Other than the difference in the color of the helmet, these two groups of law enforcement officers had similar uniforms and bikes. 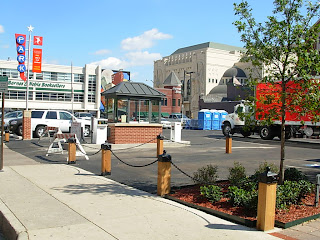 The  next stop was the Fort Worth Water Gardens. This place was delightul experience, quite soothing and non-commercial. I have never seen anything like this before!! 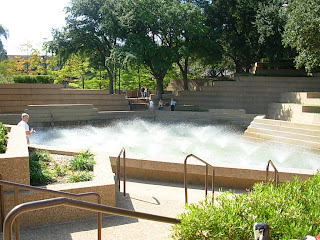 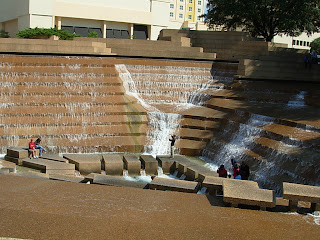 After visiting the Fort Worth Water Gardens, Steve, Reed and I headed back to the T&P station to catch the TRE back to our respective destinations.
In all, I rode about 30 miles. It was a great day to ride, so pleasant and sunny out. It was especially nice to visit a new city and meet some really cool people.
Peace :)
PS. There were some other beards at this meet-up but none was a threat to my beard-hood :)
PPS. In the group picture(s), I tried to suck in my gut as much as I could but ... :)
on October 18, 2009