One thing that has been constant here in DFW is rain. Yes, I mean rain and lots of it. Add to this a few thunderstorms here and there. As a result, many of the canals near my neck of the woods are all flooded. I took a few photos yesterday of the flooded area and the full canals and rivers.
The Campion Trail parking lot in VR is partially flooded as seen in the next two pictures. While it did not affect riders using the trail much, there was one spot that had the orange cones as a warning sign. Did I mention we had great weather this weekend? :) 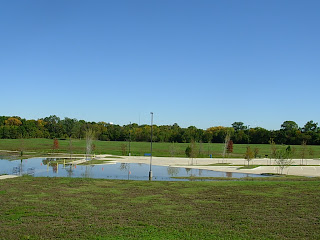 The bike path that you seen in the picture below is under water in a few spots. It is probably not too deep or anything but perhaps safer to avoid for many. 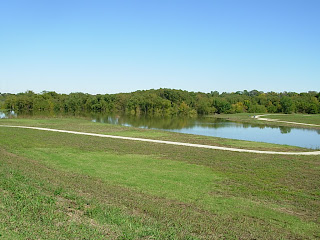 Here is the Trinity river, where the water is usally not this high. 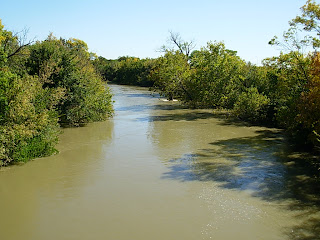 I loaded my bike with the panniers and my tent (which I needed to carry to REI). Since I had all that gear and the scenary was so picture-perfect, I decided I will picture Gikma as a glorious traveler :) 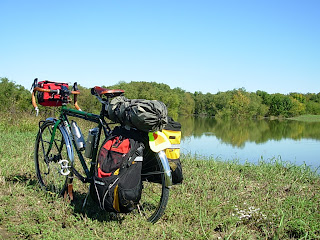 This picture is for Keri :) 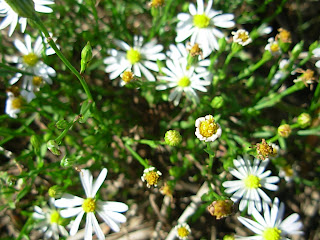 While I got off my bike and was photographing the flowers, this little feller got on my wheels and started checking out stuff. He was so darn cute, I decided I will gladly include him in my post :) 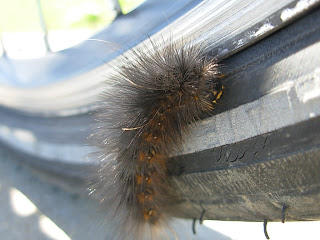 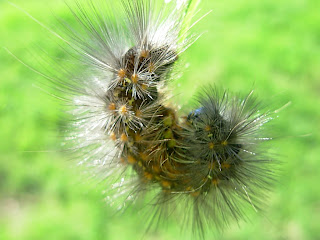 After that little dance to cheer me up, I decided my little friend should get off the bike path (for the fear of being run over). So, I placed him on this rather juicy looking plant. My friend seemed content and I bid him adieu. 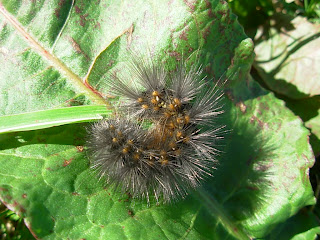 The next stop was at Alex's Valley View fruit and veggie stall and picked up some fruits, vegetables and four cans of coconut juice (tender coconut water). Check out the size of the head of cabbage. I am going to be a happy fellow this week. Lots of cabbage curry, yummy :) 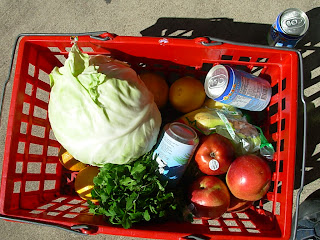 The groceries were quite a bit to carry in just one pannier and so I divided them between the two panniers I had carried. At this point, I had about 15 pounds of fruits and vegetables (huge head of cabbage, 6 oranges, 6 apples, 1 bunch of cilantro, 2 cans of coconut water (drank two at the store)). This plus the tent I was hauling to REI made my bike somewhat "loaded". I felt like I was practicing for a loaded tour, which I guess I am :)

I stopped at REI Dallas next and talked to some of my buddies who talked me into exchanging the REI Camp Dome 2 Tent for a REI Half Dome 2 HC Tent. I got the 20% off applied to the new tent. The major selling points of the Half Dome 2 HC are : 1) a vestibule which can be used to store some gear and 2) better rainfly and 3) availability of a foot print made just for this tent (the foot print for the Camp Dome is on back order).

Image below courtesy of REI!

While I was at REI, I also purchased a REI Trekker 1.75 Self-Inflating mattress pad to keep the ole bones from creaking. Listen y'all, I am no expert at camping stuff and I am learning by the wisdom imparted by great pioneers such as yourselves! I did use this pad in the tent last night and felt pretty darn good, for a mattress pad that is light weight and self-inflating.

Image below courtesy of REI!

After REI, I stopped at Saxby's for a nice cup of coffee and a bagel. Check out the picture below - no wonder I like to go here for Coffee :) 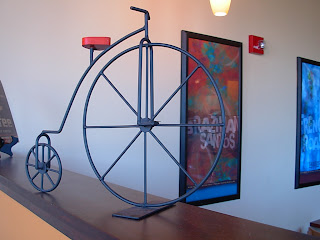 After that, it was straight back home to Irving! Today's ride wasn't too long, only 22 or so miles but it was relaxed and was with a specific task in mind. I could call it an errand ride!
Peace :)
on November 01, 2009