Sand Burrs - Not a friend of Shaggy Dog!

Shaggy and I drove to Cedar Hill yesterday so I can get turn in my Texas State Park Pass voucher and get official pass from the TX Parks Office at Cedar Hill State Park.

We stopped at the Joe Pool Lake to check it out. It was a hot, yet beautiful day here in Dallas. Shaggy didn't appreciate the heat. He hid under the bench. 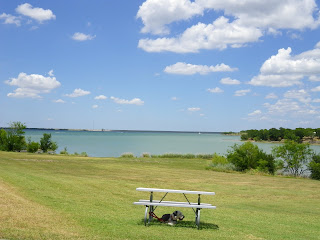 While this photo is not very crisp, I still want to show it so y'all can see the devastating effect the burrs had on Shaggy's face, which you can see in the next photo. 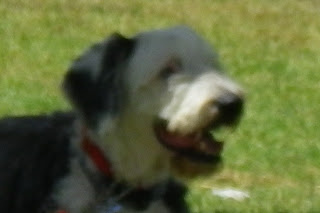 After we got done with the official business, we decided to go hike the Duck Pond Trail at the Cedar Hill State Park. Little did I know about the dangers of taking a Old English Sheepdog walking in a trail abundant with the infamous Sand Burr. The result: 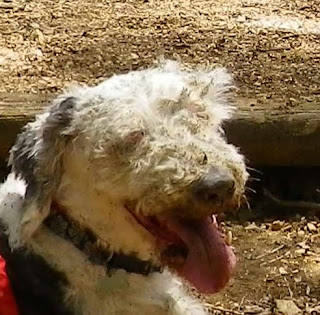 Those evil things got all over his face and he started rubbing his face with his paws and the burrs from the paws got transferred to his face and it was just a really horrible mess.

I tried pulling them burrs off but in vain. There were way too many on poor Shaggy's face and his legs. I decided that the only way to get rid of them was to shave Shaggy again. I did just that and Shaggy was out of his misery. Luckily, Shaggy's hair will grow back in no time. He is cooler again. This is the 2nd time Shaggy's been shaved this summer season.

Lesson learned: Know where you are going with your dog!

I hope your weekend was a great one!