Meera the Raleigh Twenty, neatly folded and put away, during my commute to Trinity Bicycles on Saturday! 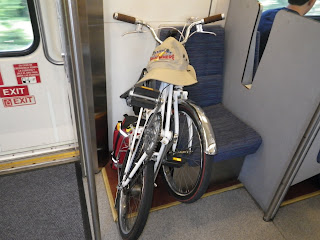 There was enough room for Meera to fit within the space around the seat shown in the picture.

Initially, I was sitting in a row with three seats in it and I had the bike parked in front of me. The people that were next to me were very nice and accommodated both myself and Meera. But once this seat (shown in the picture) became vacant, we took advantage of the fact that Meera is a folder and rode all the way to Fort Worth. I did not realize the full potential of Meera's folding-ability until then. I think that's pretty cool!
Peace :)
on August 08, 2010