Granbury, we have a problem!

Originally, Bryan M of Trinity Bicycles was to go with me and do the entire tour, but Bryan had other obligations to fulfill and so it was me and Chris of the famous Pondero blog, who actually decided to give the S24O to Lake Mineral Wells State Park a try!

Chris and I both were all setup and ready to go by 0830 hours on Friday. There was a good chance of some rain, but we weren't gonna a little downpour spoil our plans. 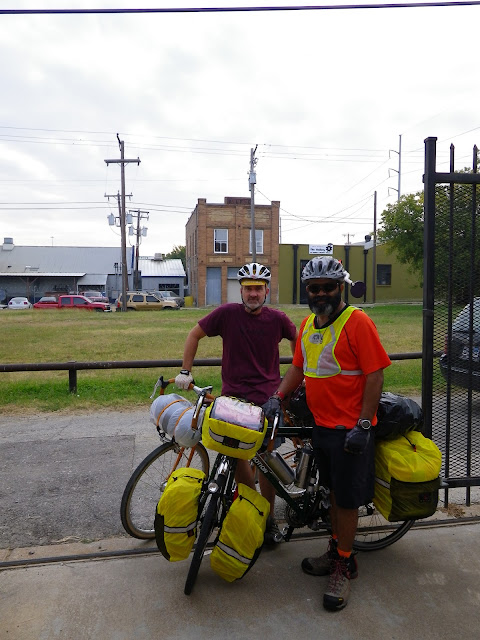 Our route was one I got from Google Maps, with the Bicycling Option. It was pretty good, except in instances like the one where it suggested taking I-30. I read that out loud and neither Chris nor I agreed it was a good idea. So, we simply took Lamar and some less busy roads to get to the Fort Worth Trinity River Trail System. We probably rode the Trinity Trail for about 10 miles. 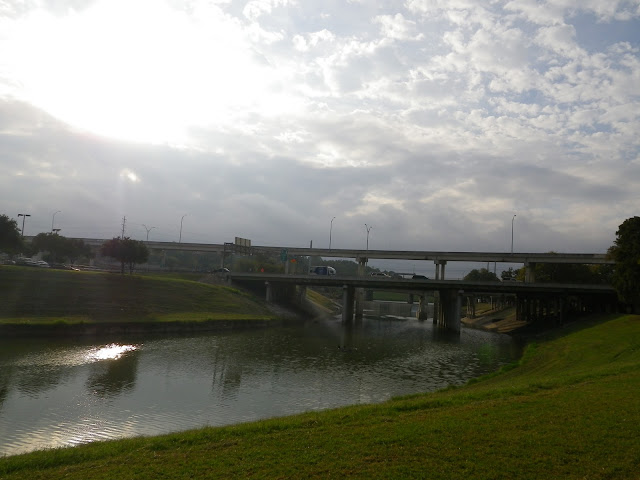 When we got to the end of the Trinity Trail, we did some quick on-the-go mapping using Chris's Blackberry to find our next street, which was Winscott. At this point, my Edge 705 was suggesting I take a fairly busy State Highway, which was nearby. So, although I used the Edge 705 as a Cyclo-computer, I did not actually use it as a GPS much. 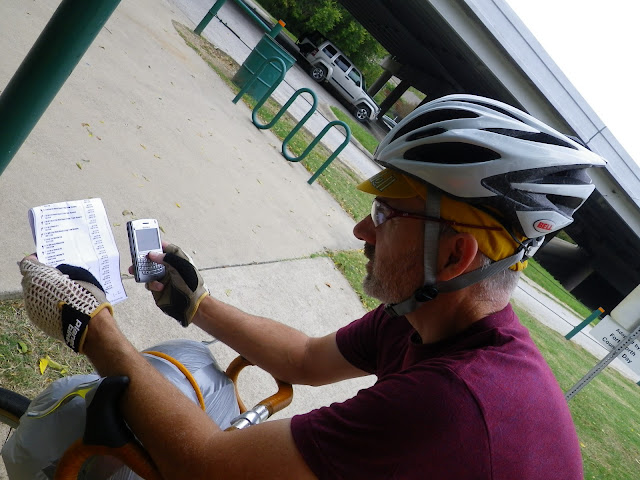 After riding through some more neighborhood streets, we got onto another Trail that took us through some very scenic areas, such as the one pictured below. I took this trail when I rode to Benbrook Lake on my First S24O. 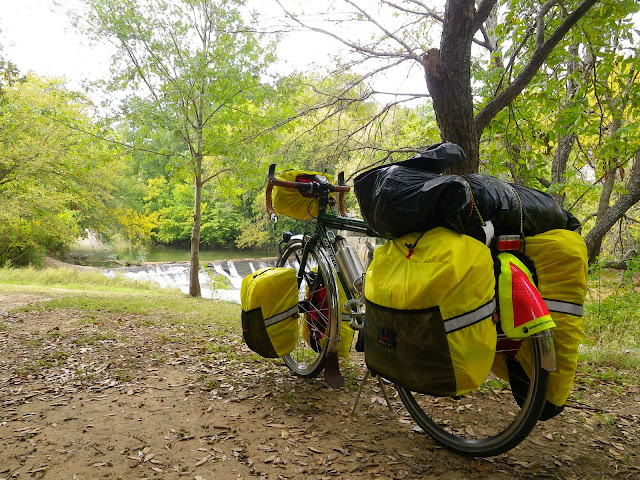 Soon, it was time to take a break at the rest stop. There is no rest stop for a while after this one! 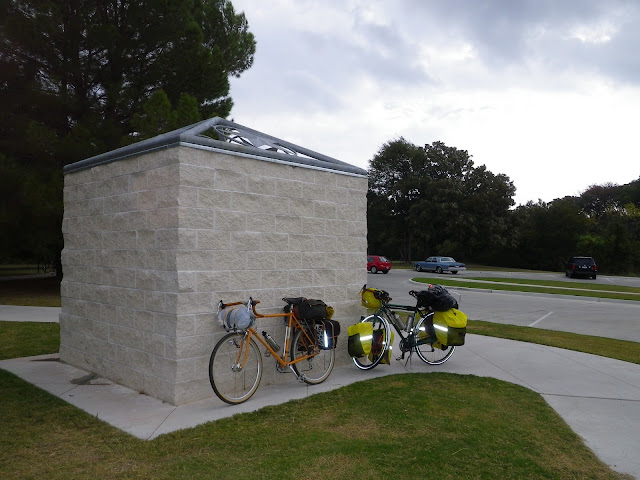 After the quick restroom break, we were back on the road. We rode through Benbrook to Markum Ranch. We saw some good scenery around here, plus there were some decent grades. 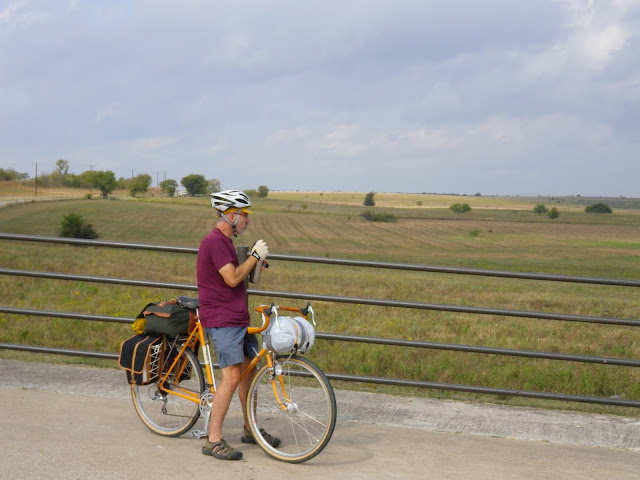 Whoda thunked? Markum Ranch it is! 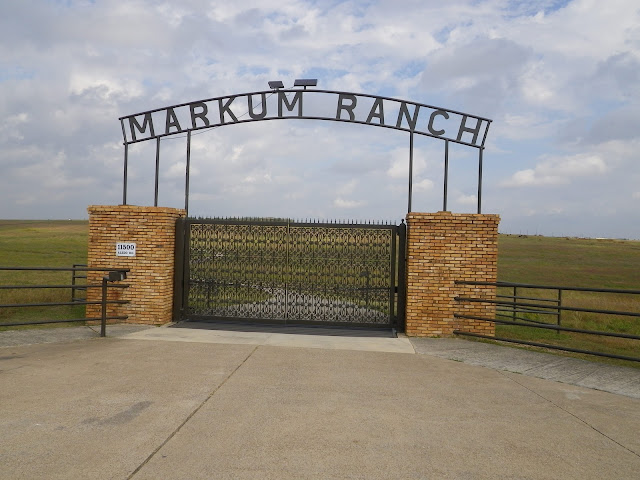 The forecast for Friday included some thunderstorms and I kept pleading to my higher powers to postpone the rain. I think my prayers were heard. It remained partly cloudy and not a drop of rain, so far! 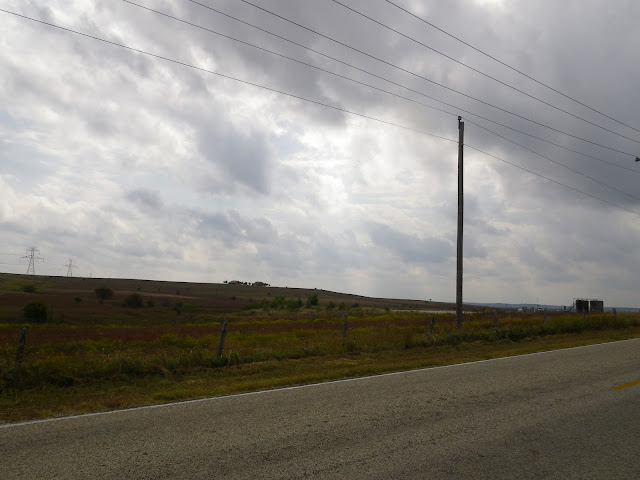 We stopped at Aledo for lunch. I saw this prospective stealth campsite on the way to Aledo. I have read about many a cyclo-tourist who has stealth-camped. I am not sure I am up for them yet. I can barely in a campsite yet. 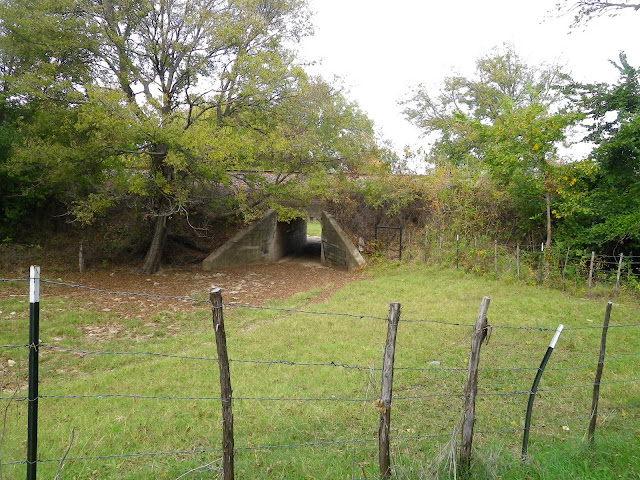 After Aledo, we rode through Annetta. While Annetta and Aledo were not big cities, they certainly flaunted some large houses, large acreage and we even saw some fancy autos. But most importantly, the route was exceptionally scenic and quite well shaded for many miles. 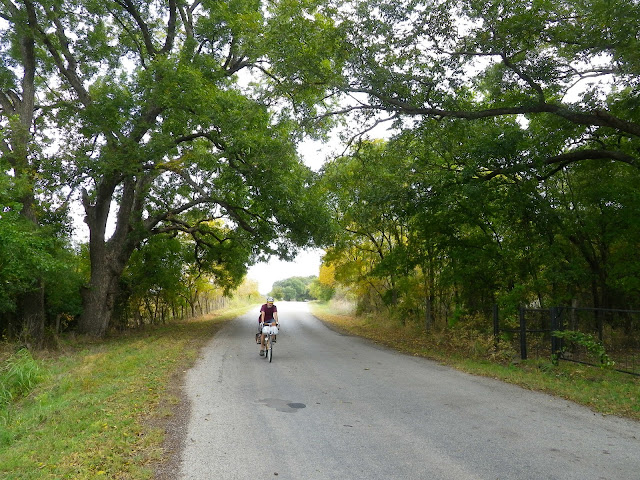 We even got to see some fancy horse-powered vehicles, such as this one! We were not sure if we could pass them or not. But Chris was kind enough to ask the driver of the vehicle if it was okay to pass them and they said, "Go right ahead" and so we passed them, carefully and slowly, so as to not to startle the horses. 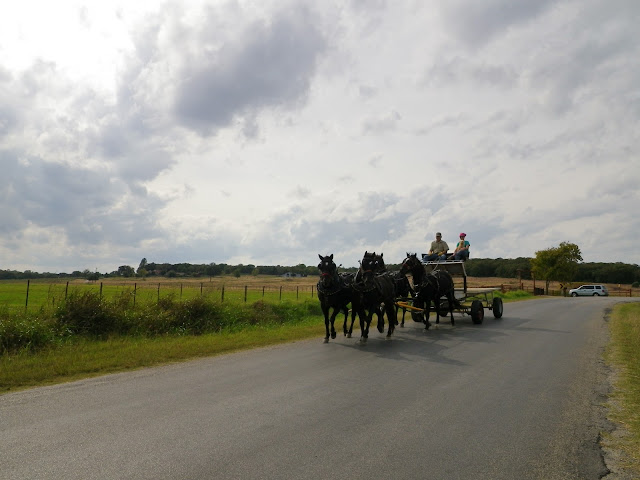 After Annetta, the next big town was Weatherford, Texas. By this time, my legs had started cramping and my left left was in pain. I was dying to get some electrolytes in my system. I drank all of the water I had brought and I was ready to get a sizable refill at the next gas station. I did precisely that in Weatherford. I bought two 32 oz bottles of Mango flavored Gatorade! I drank one right away and I poured the other one into my 40 oz KleanKanteen. That drink lasted me till I got the our campsite later in the evening. 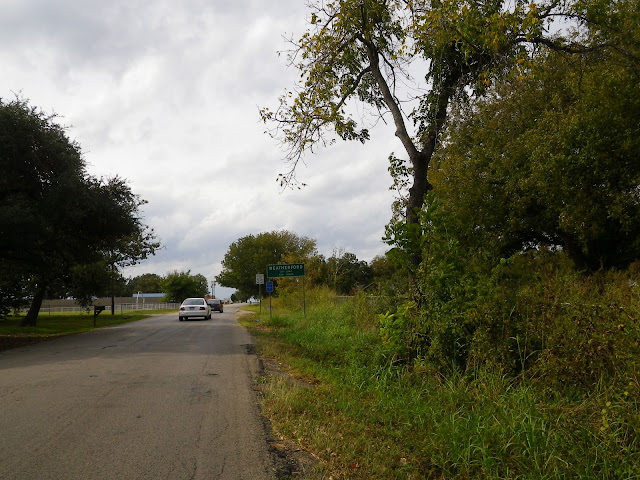 I have read that one gets to see some fantastic things while cycle touring and I have seen some really cool things during my cycling trips, but this one topped it all. I have never seen an Ostrich anywhere else, except in a zoo! Go figure! I was keen on getting to know this guy/gal, but Chris warned me about them and suggested I leave this bird alone and so I did. But seeing it gave me something I will remember for the rest of my life. 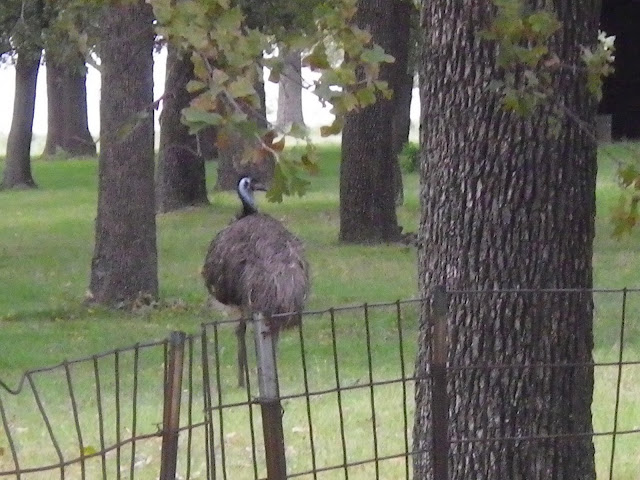 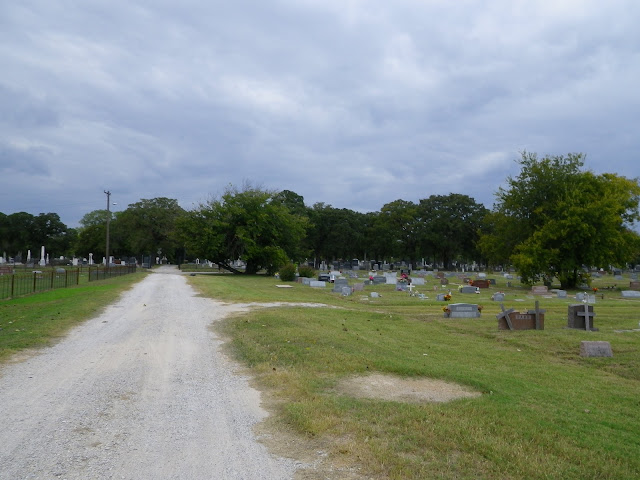 After riding through some neighborhood streets in Weatherford, we finally got to the Lake Mineral Wells Trailway. I was quite tired of climbing at this point and I was eagerly looking forward to a trail with little or no grades. 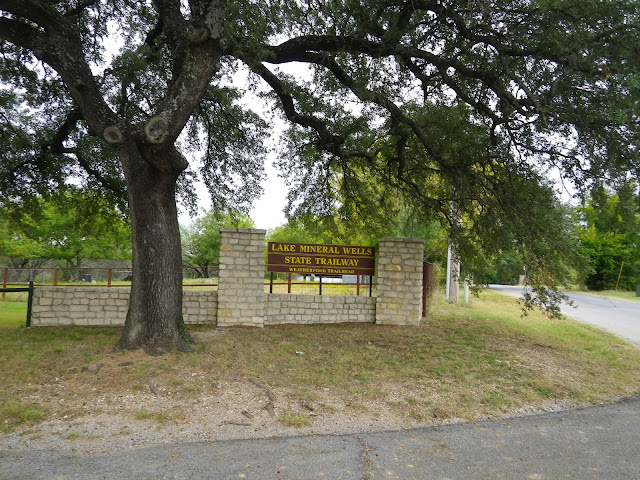 I was so glad that we were finally about to get on the trailway, believe me! 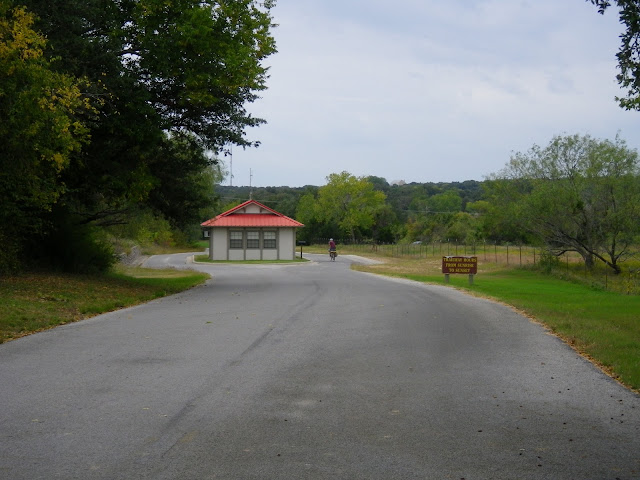 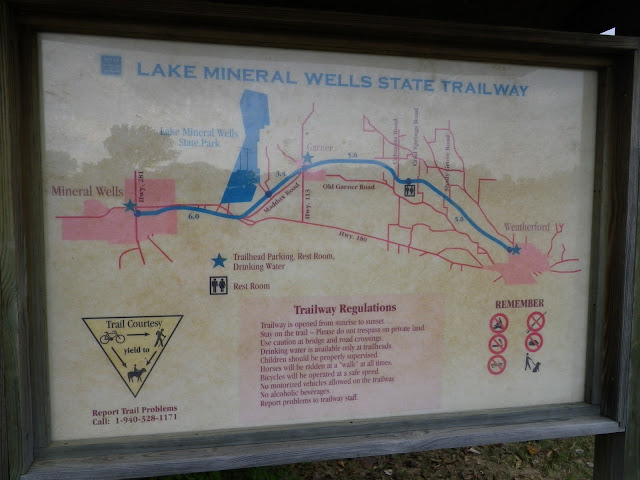 The trailway was quite scenic, just like the rest of the route. There were some good indications that it is Fall. I saw four wild turkeys. I have never seen wild turkeys before! That was awesome!! The trail was well maintained for the most part. There were portions of the trail which had loose gravel, about half-inch to two inches deep and that made riding difficult and somewhat treacherous. There are a few switchbacks just prior to reaching the paved road that leads to the Park Headquarters and riding these was quite tricky for me as there was about three inches of loose gravel on the path. At one point, I couldn't ride up the switchback and so I simply got off the bike and pushed it. Chris was nice enough to give me a hand, pushing my rather heavily-loaded ride up the hill. 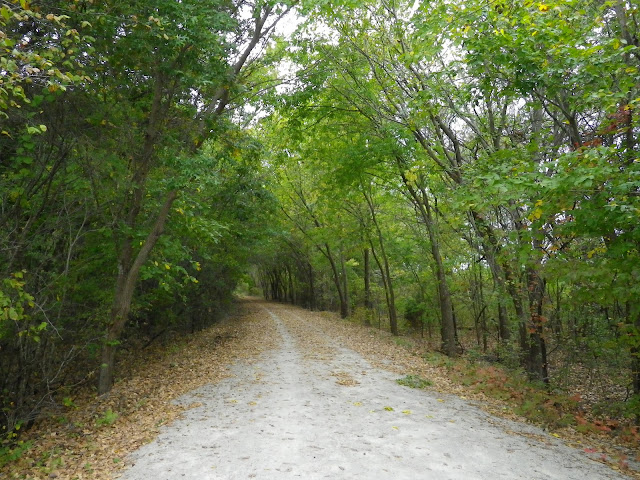 We crossed six to eight bridges on the trailway. None were rickety! 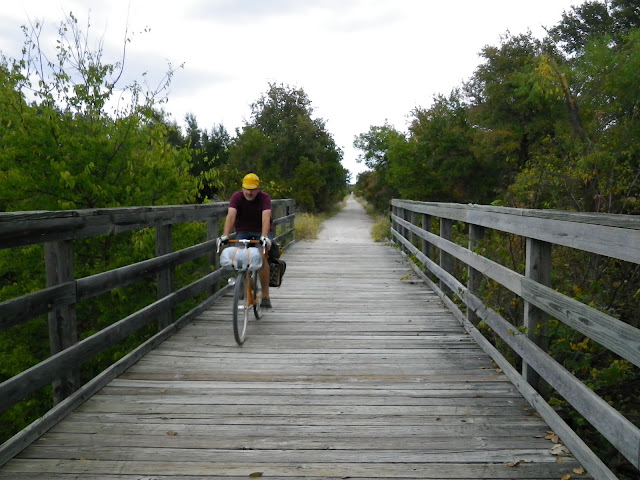 We finally reached our campsite around 1900 hours. I have never setup my tent in the dark before, but luckily I had a great flashlight with me which came to the rescue. After a bit of trail and error with using my tent, I finally got it all staked down and was ready for the night. Just prior to cooking dinner, I took a stroll to the restroom and I saw that we weren't the only ones in the park with a bicycle. But, I will bet you anything that we were  the only ones who rode to the park on our bikes! 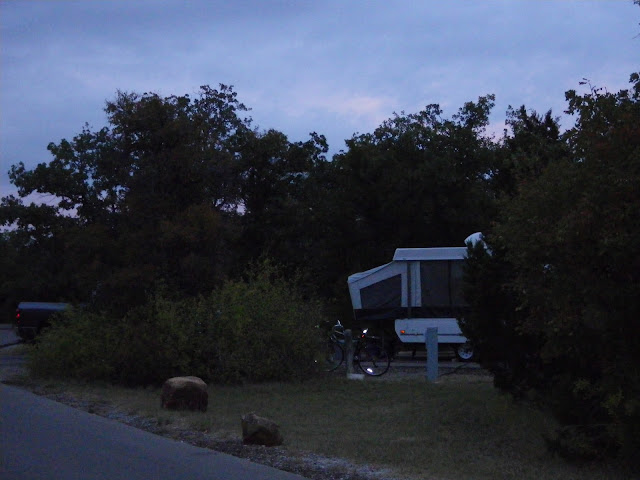 Chris and I both prepared some dinner each. I cooked two packs of Maggi noodles and shared them with Chris. I had brought enough food and I really wanted to reduce my load, even if it was at the rate of one pack of noodles at a time :) Chris kindly agreed to me using him as a test-case for the noodles. After dinner, we chatted for a few minutes and then it was time to hit the sack. Our campsite had both water and a 30 Amp electric hookup. So, I charged my Edge 705 before going to bed. Once I finally laid down, I fell asleep in no time. It was rather warm as I had the rainfly on, in anticipation of rain overnight. So, I did not even unpack my sleeping bag until early the next morning around 4 AM. I slept like a log until 0730 Saturday. 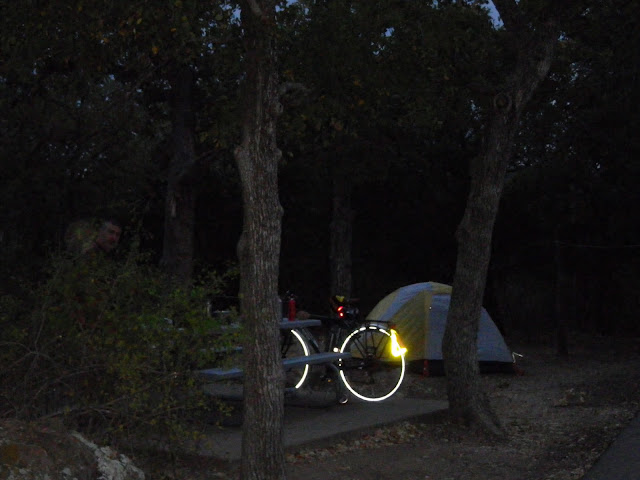 Chris had already prepared oatmeal for the two of us by the time I woke up. I threw in some nuts I had brought from home. We had wholesome Cinnamon Oatmeal with Walnuts, Almonds and Raisins. Yummy! 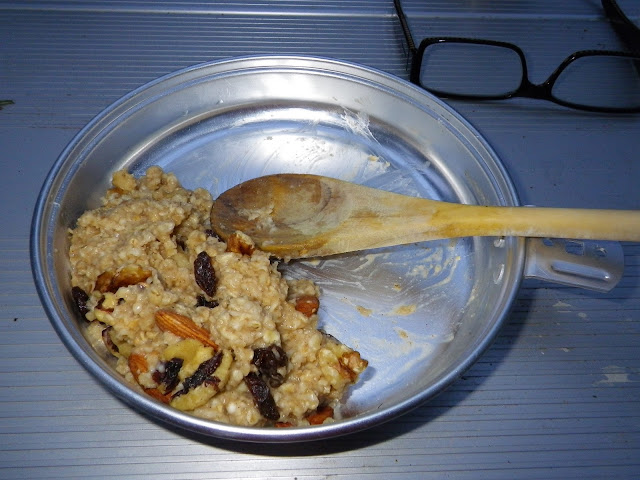 After breakfast, we packed our tents, gear and loaded our panniers onto our respective bikes. Here is Chris's lovely Homer Hilson! 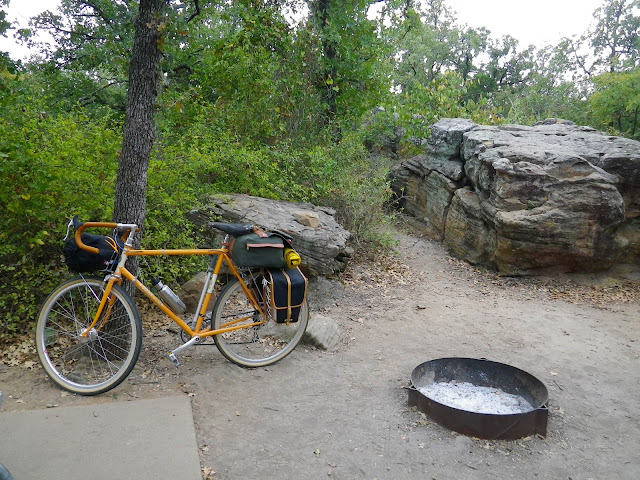 I have never seen Cactus flowers before. So, this was a Pentax moment! 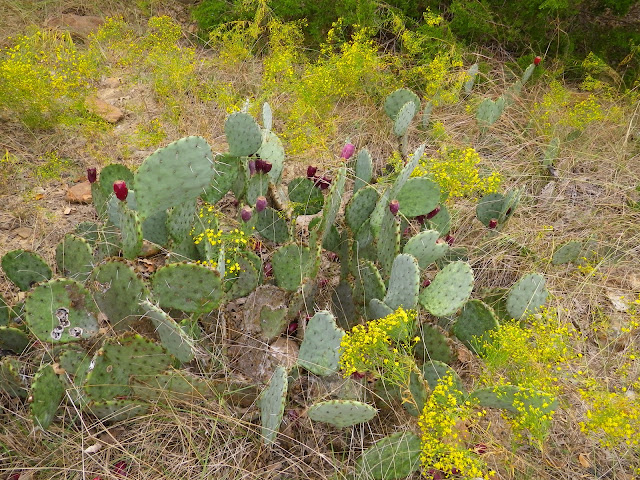 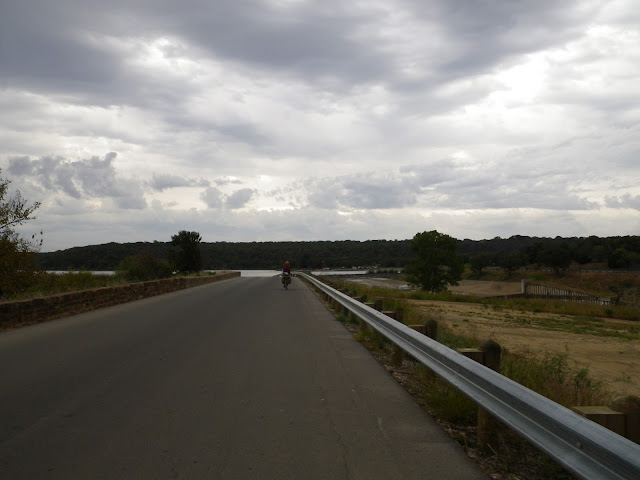 Here is a view of Lake Mineral Wells. This lake is not the source of drinking water for the City of Mineral Wells anymore. 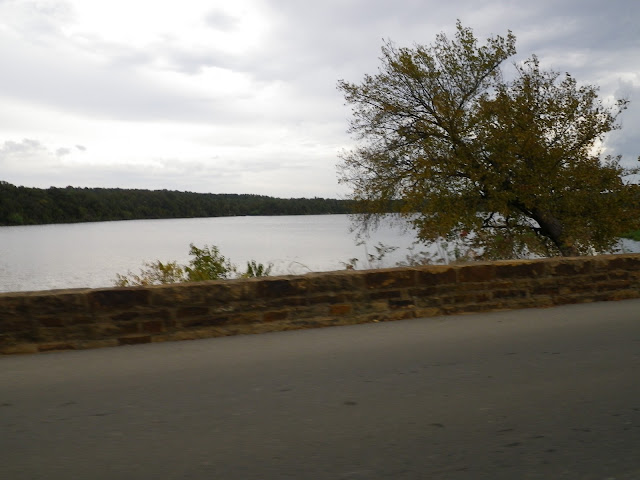 A view of the dam at Lake Mineral Wells. We found there was some water leaking through a small hole in the dam. This scared the living daylights out of me. Chris was concerned as well! 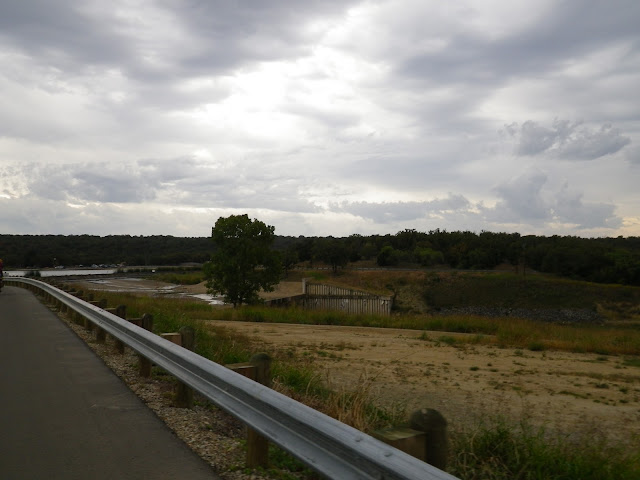 After a quick stop at the Park Headquarters, Chris headed back to Fort Worth, while I stayed back at the park.

I injured my left leg during the 1st days ride, possibly because I had hauled a cartload of stuff. I had severe pain in my left thigh and I was certainly not in a position to haul all my gear to Granbury and beyond. Mailing the stuff back was not a cost-effective option.

I had two choices at this point:
While the very nice folks at the Park Headquarters were very nice, they explained to me why they could not hold on to my panniers for a few days. I understood their reasoning and came to terms with my situation. I wasn't gonna be mad or sad. So, I picked up my phone and called home. My wife drove through a terrible storm to come and pick me up. Boy am I lucky!

I am also lucky that I avoided riding to Fort Worth or to Granbury. Apparently, the storm was so severe, there were quite a few wrecks and tornadoes were spotted near Fort Worth. Chris was saved  by his wife, who came to pick him up at Weatherford. You can read more about his story here.

We saw several wrecks on the highway on our drive back to Fort Worth.

Given all the mess I could have gotten myself into, in terms of hurting my leg further and the weather, I am actually glad I didn't ride the rest of the tour. I consider this trip as a real field-testing opportunity for testing my bicycle, my gear and really understanding what I can and what I can not do in terms of cycling. I think I learned a bunch about my cycling skills, learned how to camp (at least in dry conditions), tested all my gear and that's that.

My wife and I stopped at Spiral Diner in Fort Worth for lunch. We were both quite exhausted at this point and needed to get out of the car and relax a bit. 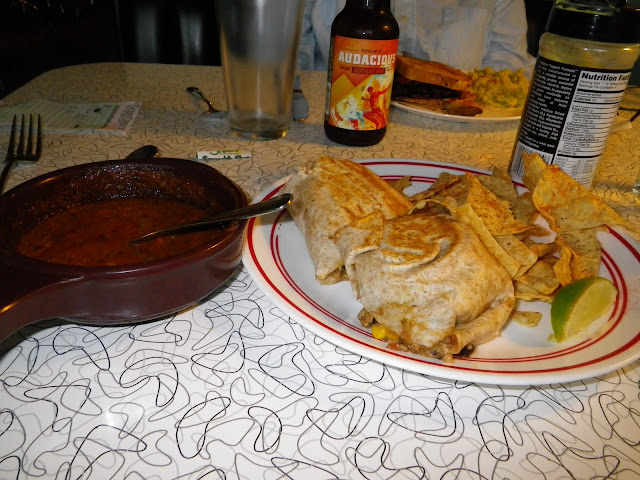 I thank Chris for his unflagging enthusiasm during the ride. I was much slower than him due to my excess baggage and he was such a gentleman. Though he could have ridden faster and gotten to the destination hours ahead of me, he stuck with me and made sure that I wasn't left behind. So, thank you Chris! I really appreciated your camaraderie.
Special thanks are also due to my wife for her support and encouragement. Without your help, I may not have made it home.
Thanks to Bernie of Trinity Bicycles for permitting me to park my vehicle on his premises.
Here are some statistics about our mini-tour!
Peace :)
on October 25, 2010