After an extremely busy weekend with the LCI seminar, I am taking it easy for a day or so. Steve and I attended the seminar, among other attendees and we both successfully completed the requirements to become LCIs. Tomorrow is supposed to be a weird weather day in DFW. I still plan to ride, unless it is downright nutty to ride!

Email ThisBlogThis!Share to TwitterShare to FacebookShare to Pinterest
Labels: LCI

The LCI (Licensed Cycling Instructor) seminar is this weekend. I have been busy the last couple of nights preparing the lecture notes for the classes. I will be teaching two classes, one of which I will teach along with Warren. I have not prepared any lecture notes since my teaching days at the University of Phoenix. So, I had to spend a little bit of time preparing these notes.

As a team, Warren and I will teach Destination Positioning. The objective of this segment is to teach the cyclist students the principles they must use to know where to ride when proceeding through an intersection or making a turn.

I will be independently teaching the segment, Feeling Good. The objective of this segment is to teach the cyclist students the fundamentals of nutrition and hydration.

BTW, I find myWonder Veggie Shake to be a decent meal replacement for my rides! 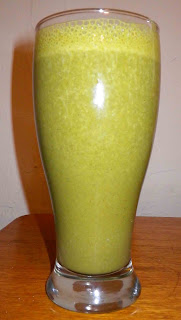 Training with a Great Mind!

Steve came by on yesterday to help me practice the Quick Stop and Instant Turn maneuvers for the LCI Seminar next weekend. It has been a year or so since I took the TS101 class and I was a bit rusty on some of the maneuvers. This practice session helped me brush-up on my skills. So, thanks, Steve! 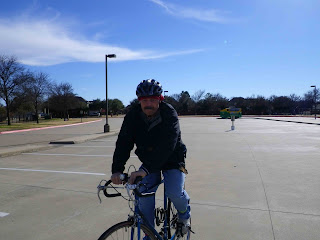 It was a great day to be out, sunny and relatively warm. We had a great time practicing and also talking about various cycling topics.

Here is the bike that Steve brought for yesterday's practice session. It is an oldie but a goldie! 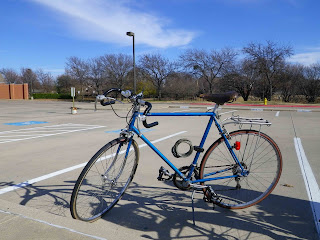 Hope your weekend was a fun one!

Last weekend, I made two dishes. One was Masala Cabbage Curry and the other was Spicy Dal (Lentils)! Both dishes are easy to make and very low in fat. They are both high in fiber, nutritious and quite tasty!

Here are my recipes: 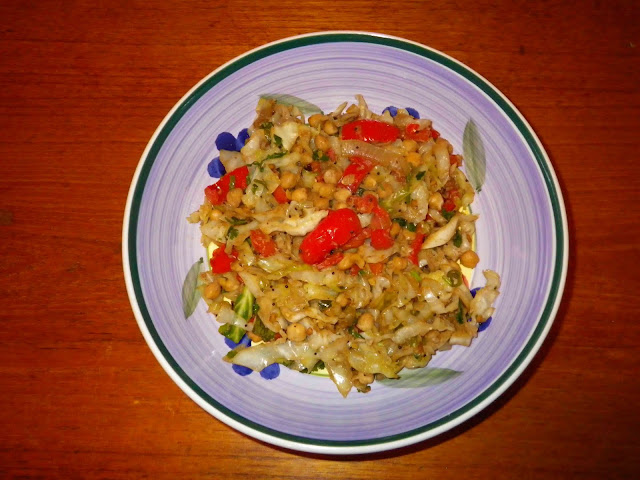 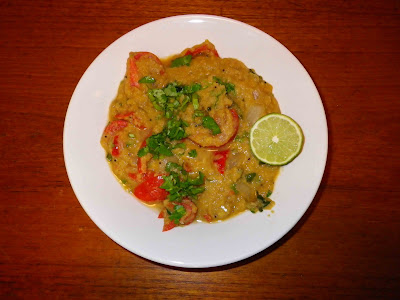 Please don't take your frustration out on me!

It was a great day to ride, go to work, put in my time, do some brainstorming, go to meetings, all that good stuff!

On the way back from work tonight, I was on La Villita headed northerly. I saw a car at least a quarter mile in my rear view mirror. I was on the right lane on this two lane road and I figured the car would pass me soon using the left lane. Boy was I wrong!

The driver waited till the left lane ended, gunned his engine, swerved in order to avoid me and the median  (and I really hope that it was not an erroneous move on the driver's part that he missed me), pulled into my lane, slowed down to 2-3 mph, blocked my way, and rolled down his window. Here I am wondering if the guy is gonna pull out a gun and shoot me or something. So, I am preparing myself for the worst, perhaps yet to come. The guy talks to me in a relatively calm voice. "So, I just wanted to show you how it feels to have a slow moving vehicle in front of you on the road. I guess you are trying to make a point and I just wanted to make mine". I simply retorted saying, "Sir, I have every right to be on this road as you do". Before I even finish my sentence, the guy guns his engine and takes off into oblivion.

Below is a map of where the incident took place!

View Larger Map
Soon as the car left, I rode into the Campion Trail parking lot right away to avoid any other conflicts. I felt shook-up. I thought this was going to be a nasty incident. I felt very hurt and scared at the same time. I was angry for a little while, but I cooled off soon. I could not pull out my camera which was in my shorts pocket and turn it on before the guy pulled in front of me and obstructed my way.

Here are my thoughts/questions to this mid-50s Caucasian male driving a White Chrysler Sebring Soft-Top coupe (just in case you or someone you know who you told tonight's incident to, reads my blog):
And, finally a plea: Share the road with other vehicles. Bicycles are vehicles. If you are having a bad day, don't take it out on someone else.

Even though you scared the living daylights out of me, albeit for a short while tonight, I will continue to ride the roadways, in a vehicular manner, following the rules of the road.

I don't agree with you on where bicycles should ride and should not ride. And, most importantly, I didn't appreciate you trying to jeopardize my life. But I forgive you!

May God bless you! May you have some much-needed peace of mind!!
Peace :)

PS. I think I need a camera mounted on the handlebar.

I am perhaps in the market for a new Hi-Vis Night Reflective vest. I want my new one to a) possibly display my slogan, b) have three or more reflective strips on the back as well as the front.

My original one of these vest I have is the one I bought one from REI, which I don't like anymore. It is shorter in the front and longer in the back - somehow doesn't feel right.

After the REI vest, I bought one from Harbor Freight for about $5. I love this vest. It doesn't look too geeky and keeps me visible, day and night. I also painted my favorite slogan on the back of it, viz., "Infinity Miles Per Gallon". I used the symbol for 1/0 instead of writing it out in words as I have done in this post. This vest has grown old and I am not 100% sure it has all of its original reflectivity. 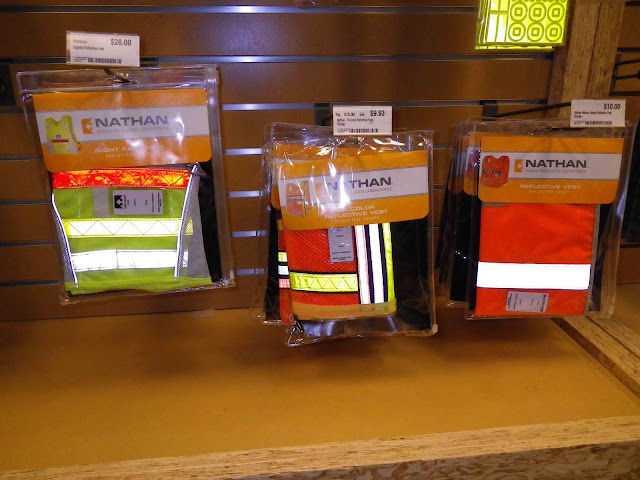 The last one I have is one I bought from Walmart. It works pretty well, but it gives the feeling of wearing a over-starched military uniform. Too stiff!

So, to cut to the chase, I am considering buying a new vest. I want to add more reflective strips to the new vest than the default configuration.

In addition, I want to make my own reflective arm and ankle bands. This might require some thinking and might involve some trial and error, but given I haven't seen any commercial product that rocked my world, I am willing to put in the effort to make something I would like.

What do ya think? What do y'all use for reflective bands/vests?

Recently, I got my Co-Motion Americano tuned-up at REI Dallas. Most importantly, I got the wheels precision tuned, the cables protected from the elements using a special widget that attached to the end of the cable housing. I got it back from REI last Friday.

After riding it on Saturday, I felt like the bike needed some more fine adjustments. So, I rode to REI on Sunday to get my bike adjusted properly. I can do a few adjustments to the bike, but I figure if I am getting my bike properly tuned-up, it should work flawlessly when I get it back from the shop, know what I mean?

On the way to REI, in Farmers Branch, I couldn't pass on taking a picture of this dreary looking scene. I guess, it is winter after all! 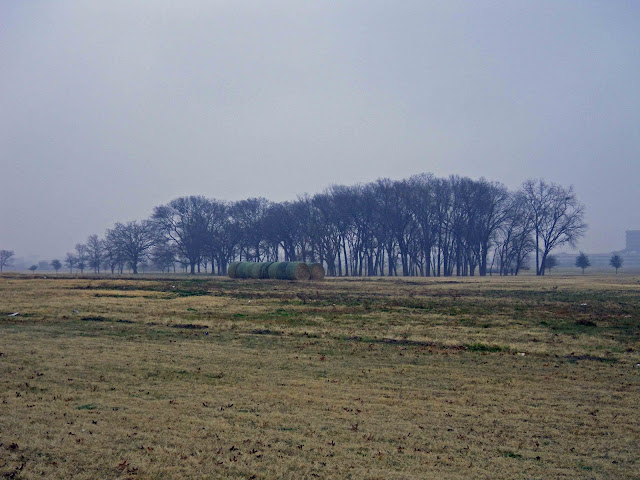 The round trip to REI Dallas from my neck of the woods is 20 odd miles. In spite of the misty day, it wasn't a bad ride at all.

Hope your day was a fun one!

I am not ashamed to admit that I was addicted to Cheese Bread Sticks when I was a student. They cost more than the non-cheese kind, but we were all richer when we were students on an stipend or living off student loans, right? :)

Recently, my great wife taught me how to make Tofu Sticks, which are a great replacement for Cheese Bread Sticks, at least in terms of fat content.

This is how we make them:

Here are the Tofu strips coated with Sriracha sauce! Shortwave anyone? 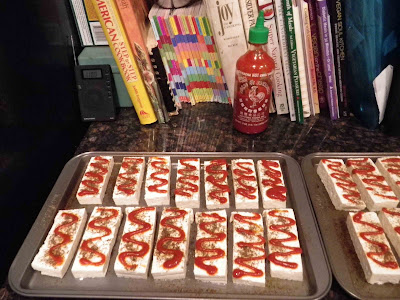 Here is our end product! 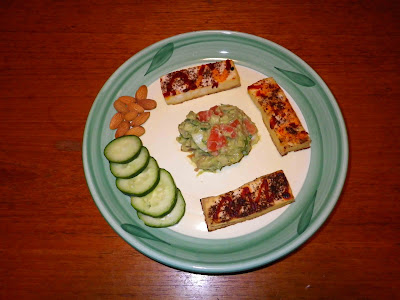 I am a fan of Dr. Mercola. He has posted some information on non-GMO foods in his Newsletter. One key takeaway for me was the non-GMO shopping list.

Here are the shopping guides. For more details please refer to nongmoshoppingguide.
Peace :)
on January 12, 2011 No comments:

Here is my end product! 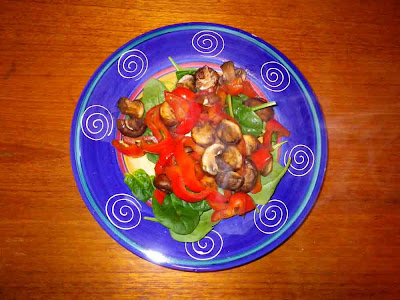 I had only one errand to run today and that was to go to the grocery store and get some goodies. I didn't feel like riding any other place today, which is okay with me sometimes. 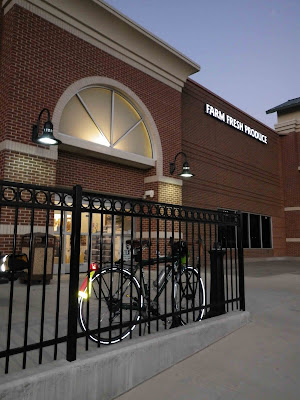 Here is the loot from the grocery store: 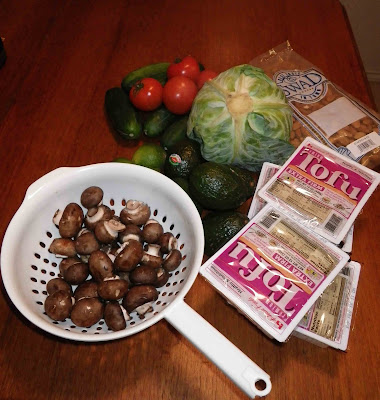 Much of the produce purchased today will be cooked sometime tomorrow. I will post the recipes on VegetarianCyclist.

I will leave you with this song!

Here is my end product! 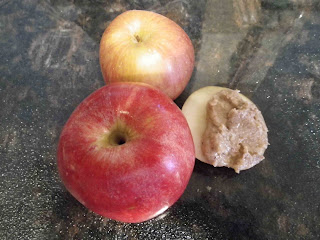 The part I enjoy the most is that I know exactly what goes into my almond butter. I do not have to believe all that the manufacturer claims.

I could taste the Extra Virgin Olive Oil in the Almond butter. I don't mind it one bit, but some might. One viable option to the Olive oil might be Walnut oil. Perhaps, I will try that next time just for fun!