Below is the route I took. The total distance to Hidden Cove Park and back from home is NOT 57 miles. It is only around 40 miles. For some reason, I can not get Garmin to not pass on the wrong parameters to Ride With GPS or I am doing something wrong. However, I rode another 8 miles after the trip to Frisco. So, I did ride 48 miles or so, FWIW :)

I rode from home to the Farmer's Branch DART station to catch the Greenline to North Carrollton station. 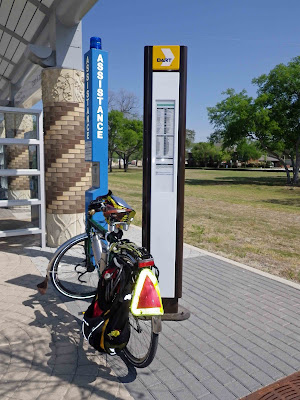 DART has great service on weekends as well. The train to Fort Worth, the TRE does not run on Sundays. 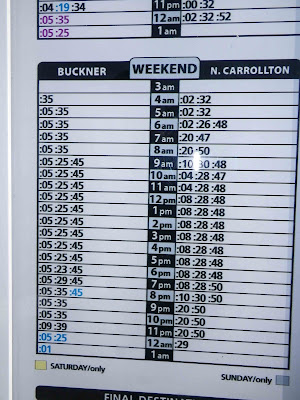 Need I say more? The stats speak for themselves. Even without the published stats, we know mass transit and human powered transportation are definitely easier on Mother Earth! 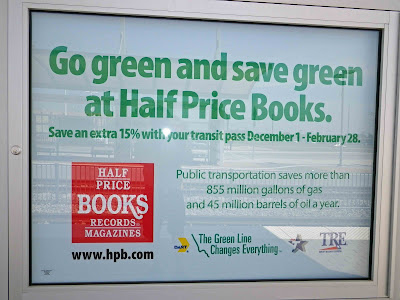 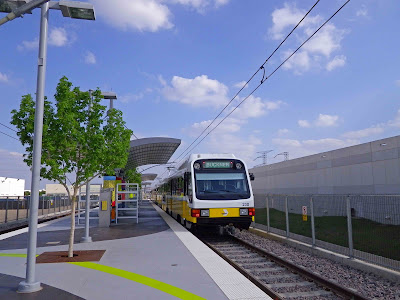 DART train - super squeaky clean inside. I might have been the dirties part of the train, on the way back from Frisco :) 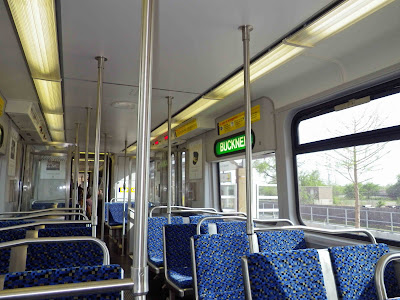 Raised crosswalk - I was just reading about these in the Rails-To-Trails magazine last night! They exist in Texas, whoda thunk? 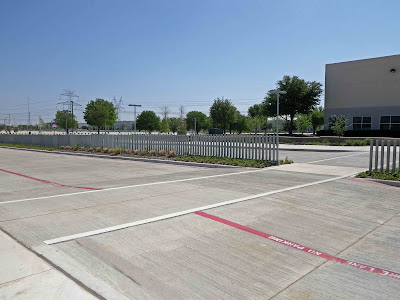 The colorful structure in the distance is a slide for kids, I think. Nice addition to keep the kids active and occupied, while visiting the DART station. 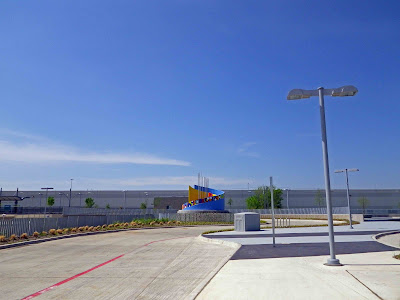 Did I mention that I hate littering? I seldom edit photographs for reasons other than adjusting color, lighting, etc. But in this case, I had to make an exception. It is an ugly sight, but hopefully it will get the message across! 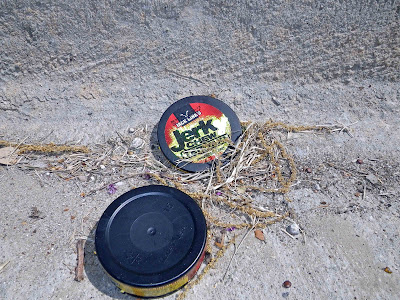 Railroad tracks just before reaching Lewisville (I think). I had to stop and admire the wildflowers! 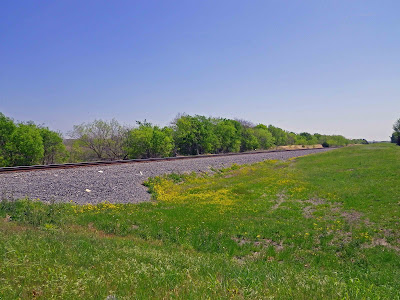 Nice looking day, ain't it? The traffic was almost a breeze until this point. The careful eye would pick out the shoulder that would be most difficult to ride a bicycle on safely. 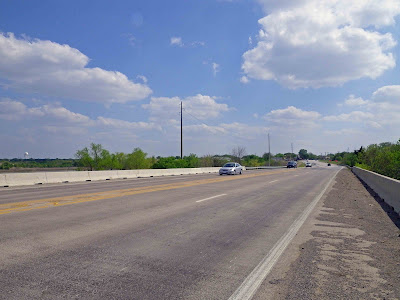 Then, there was this, near Colony, Texas! Still not bad, there were two lanes and people left me alone. Well, perhaps with the exception of those who just wanted to show me how much faster, noisy and polluting some of those HEMI vehicles can be! 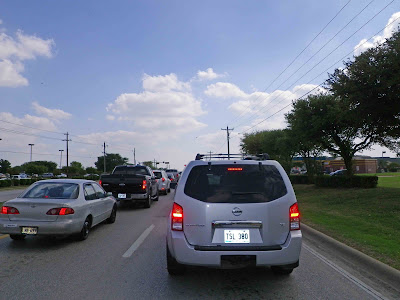 And, then this happened! Josey lane turned into FM 423, with only one lane, with speed limit of 50 or so. Oh, did I mention there wasn't "no shoulder"? 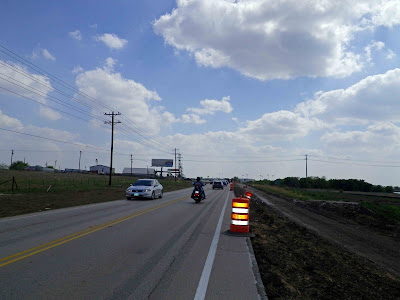 Then, traffic really picked up and it was getting nerve wrecking. I don't believe I am a novice rider, but this traffic, the way these folks was driving, it was something else, I tell ya! I think I pulled over in this picture to take some good pictures of the traffic and road conditions. I might have done that to take the edge off as well. 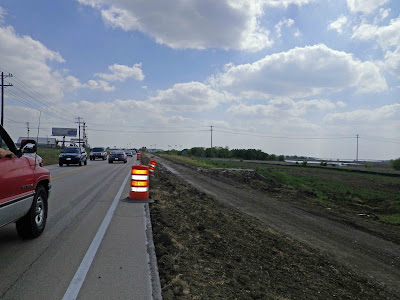 I eventually took a turn off FM 423 onto Stonebrook Parkway, which was a bliss. Hardly any traffic and those that drove on this road were cautious and courteous. We need more of these drivers! Pictured below is the Frisco Lakes Village Center. More about this in a short bit! 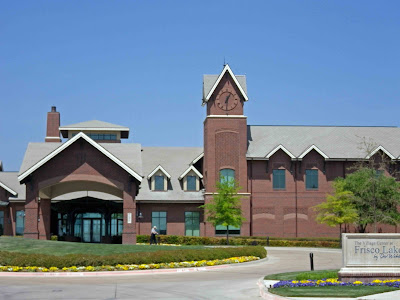 I continued on Hackberry Road to my eventual destination - Hidden Cove Park. 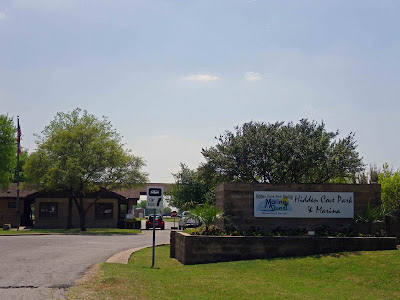 The nice people at the Park Office told me I could check out the place and they wouldn't charge me, as long as I did not use the facilities. I promised them that and kept my promise. 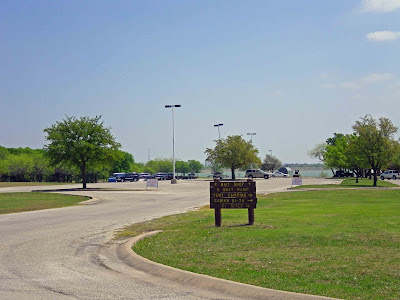 I had to find out where they let people tent camp. So, I rode around until I found the general area. 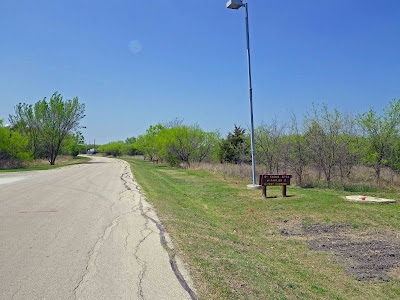 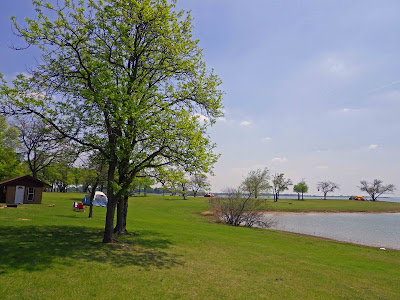 Hidden Cove Park also has cabins which would be great for families. 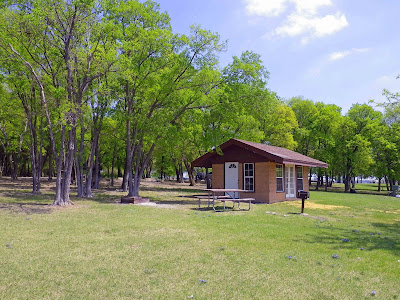 And then, I saw her at a distance! I heart started beating faster ... 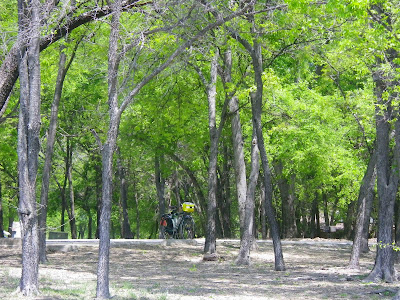 After taking a quick break at the campgrounds at Hidden Cove Park, I decided I will head back home. On the way back, I stopped at the Frisco Lakes Village Center and checked out the facility. They had a nice library in there. They also had an indoor swimming pool, a pool table, a gym, etc. It was a nice outfit. 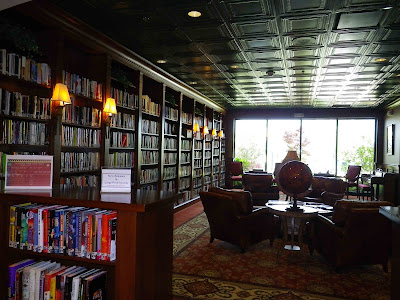 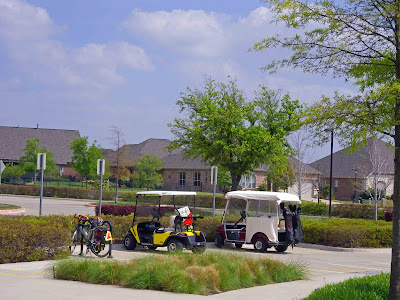 I rode the rather challenging FM 423 and the trafficky, but not-so-bad Josey Lane back to North Carrollton DART Station. Traffic was very heavy on the way back. Given the significantly higher volume of traffic and the road construction on FM 423, I decided I would pull over into the non-existent shoulder area for a bit and take photos of the traffic. Here is yours truly. No, I am not angry, just delightfully posing for the camera and keeping an eye on that awful traffic coming from behind. 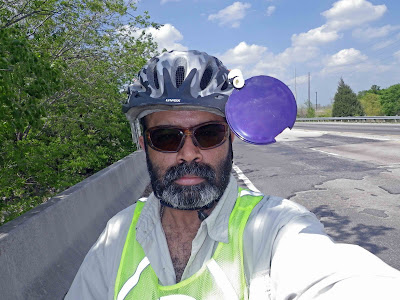 Interestingly enough, when I pulled over to take photos of the traffic, I thought I noticed that the vehicles  going in direction of my travel slowed down. But soon I realized that traffic in both direction had slowed down. This made me wonder if I was mistaken for a Highway Construction Worker. They could have proceeded at the same speed they were going before. Why did they slow down? Did my Hi-Vis vest  abd the orange cones prompt them to slow down? If that's what it was, that's fantastic. At least for the cyclist...
The wind picked up on the way back. It was a fairly warm day today. I needed a treat. So, I stopped at Braum's and had an Ice cream cone. $1.79 for two sizable scoops, not bad, eh? 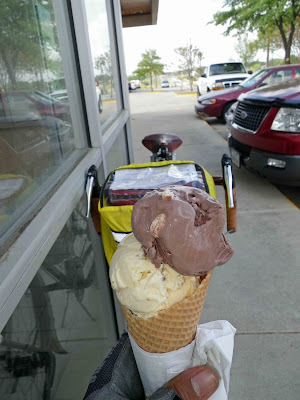 Sightings of other cyclists during Ice-cream break! This particular one was built like a "chopper". 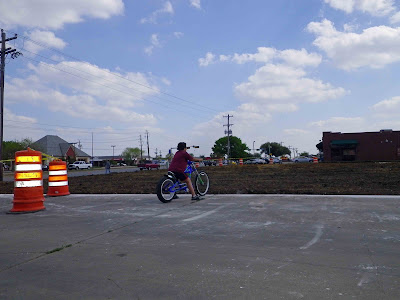 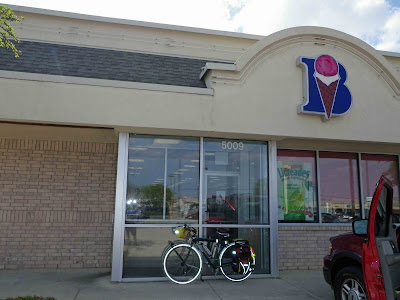 After the break, I headed straight for the DART Station, hopped on the DART, got off at Farmers Branch and headed towards home. Just before I crossed Hwy 121, my right leg started cramping, real bad. I had to pull over and think of a way to compensate the salts I had lost, fully realizing there was no place nearby to buy some sports drink like Gatorade. I had nothing in my possession except some baking soda. Baking soda and water it was. It helped a bit, but I had three more episodes before I got home. Luckily, after I reached Farmers Branch, there were plenty of Gas Stations on the way home. I bought myself two 32oz bottles of Gatorade. I normally drink between 32-64 oz of water every day. I guess I wasn't drinking enough today.
On my way back, I saw this very cool looking trike in Farmers Branch! It's made by can-am (Bombardier Produits Récréatifs). 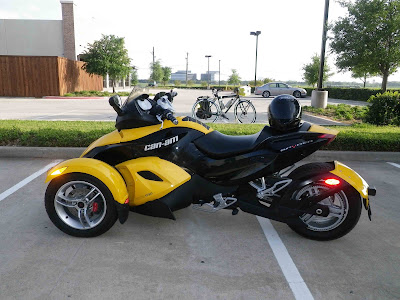 One more photo of the can-am Roadster! I chose not to race this one :) 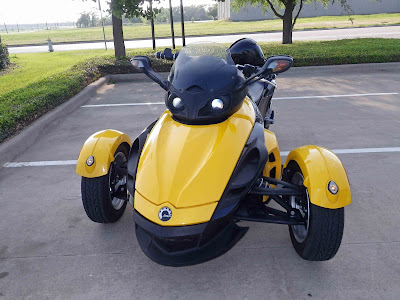 Some observations:
Hope your day was a great one!