I found Blue Velvet, the Bridgestone Carmel on Craigslist. A friend of mine and I drove to Denton to pick up, Blue Velvet and her mixte counterpart, which my friend kept. We were told the parents of the feller who sold us these bikes, bought them around 1985 (we have the original sales receipts and the manuals), but never rode'em, which was hard to believe at first, but on more careful examination, I have to wonder if that claim could really be a true one! Not a blemish on either bike! Given how little we paid for this bike and its companion, we got a very nice deal. 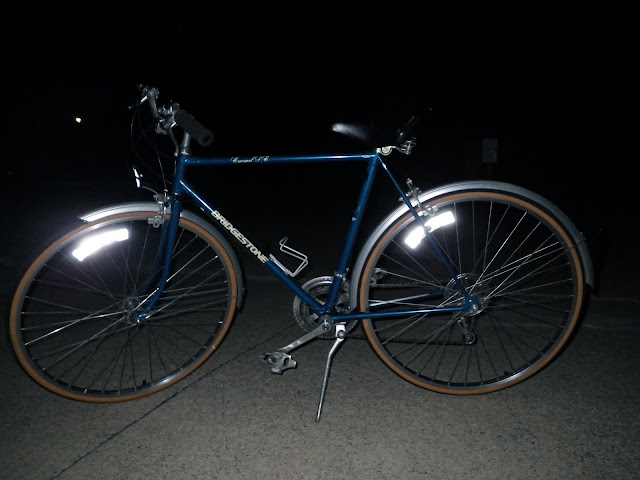 The tires do show some very minor signs of aging near the rim, but other than that the tires do hold air pretty well. They haven't lost any air pressure since Sunday night or whenever they were aired before that point. The tires are 27 x 11/4 Bridestones. The paint job is very original and quite lovely. It is a darker blue with some sparkle. 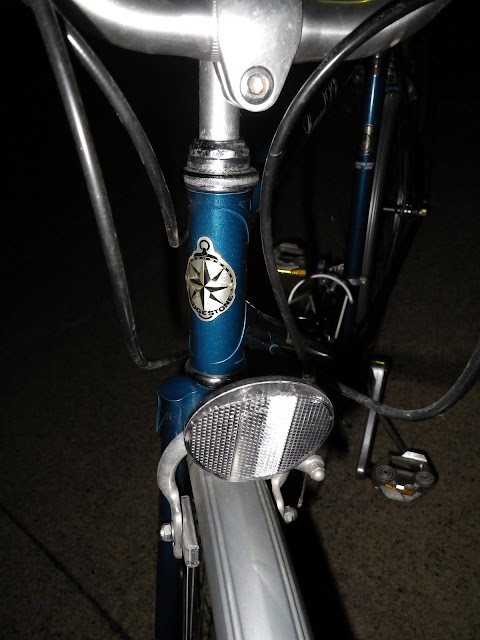 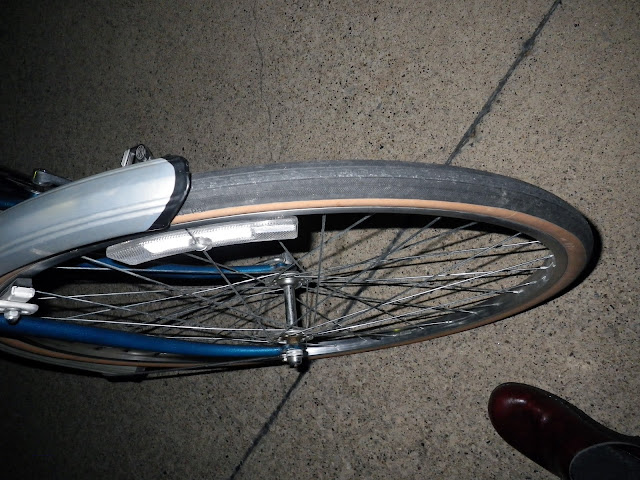 Some kinda Shimano pedals, with a flat pedal on one side and provision for cleats on the other? 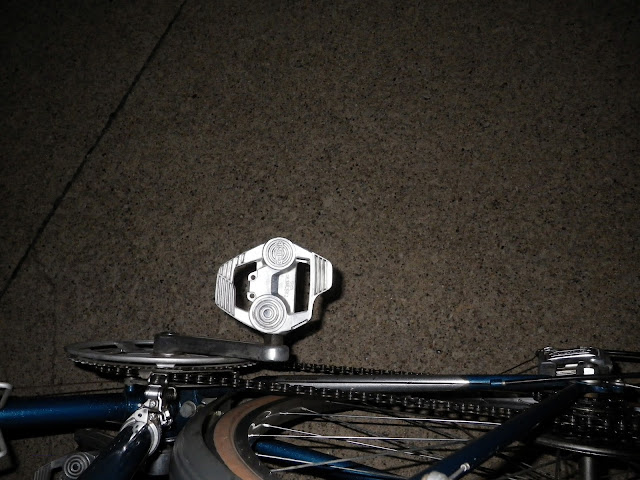 The gears were a bit sticky and the chain was dry as a bone. I lubed the chain and the various pivots and adjusted the Hi/Lo settings a bit to get the gears to move without sticking. Suntour 6 speed cassette in the rear and two chain rings in the front for a total of 12 gears. I haven't explored how well spaced or hill friendly these gears are, as I haven't taken the bike beyond a square block of where I live, just yet. 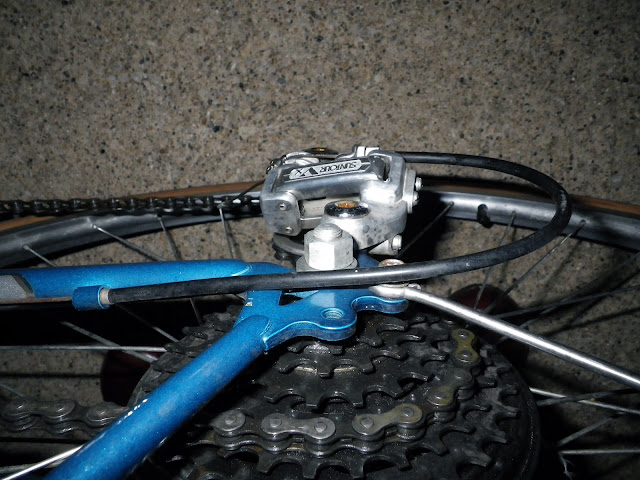 Does it say Carmel T. E. ? Touring Edition, may be? I can't figure out that font very well. What do you think? 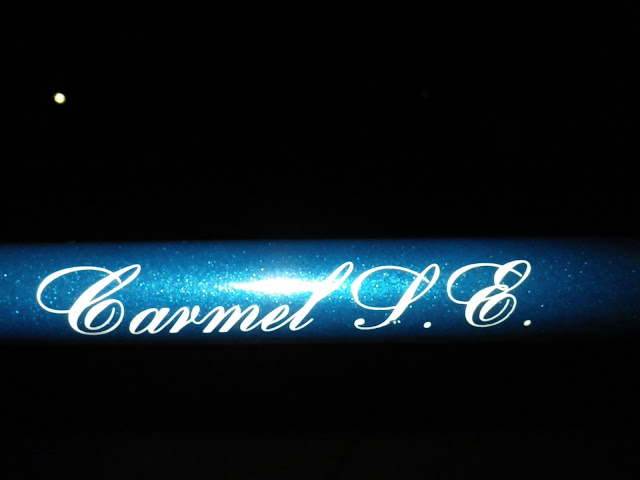 The original saddle in mint condition. It is quite comfortable, though the Brooks lover in me, is pondering about the possibilities. 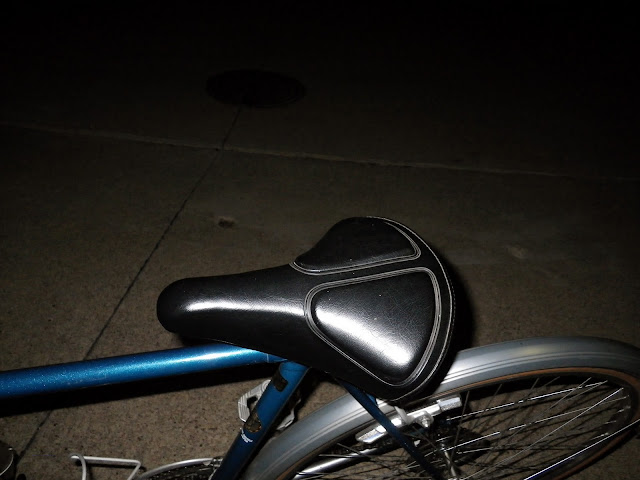 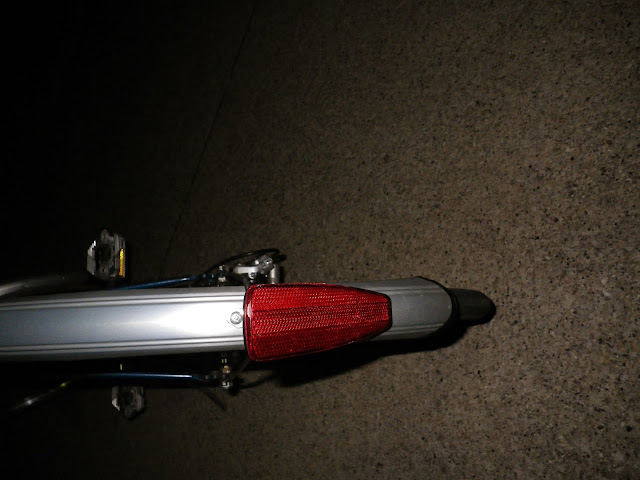 Quite possibly the original bottle cage! The original decal in great condition. If you look closely, you may see the discoloration in the exposed brake cable. Do you think it makes sense to wipe it with WD-40 to get rid of the discoloration (oxidation) and not change the cable, as long as it works well? 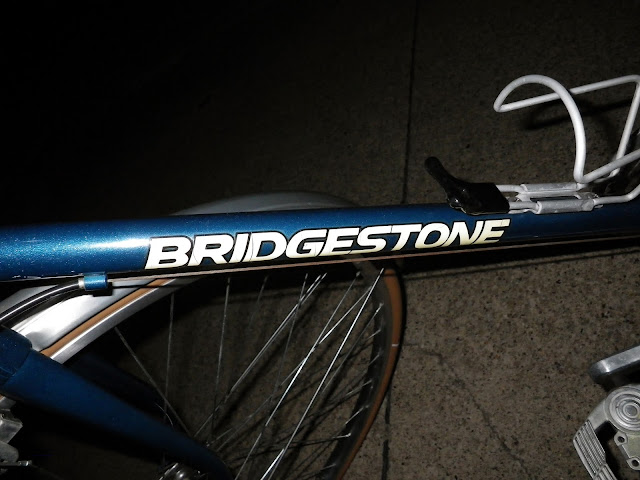 More stickers and decals, showing the country of origin and the type of steel. 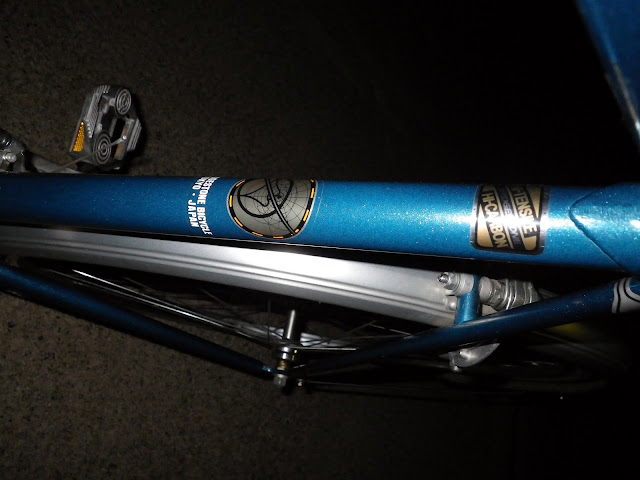 The handlebar grips are spongy and soft. I think they may be the ones I want to replace first, if anything. 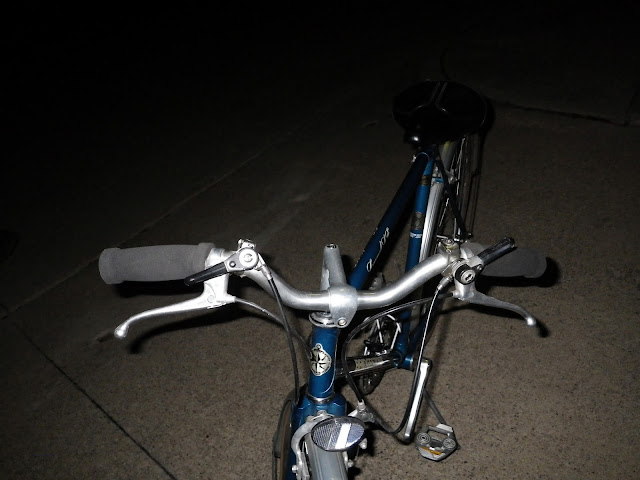 This afternoon, I took the new bike to The Bike Shop at Las Colinas for a overhaul/tune-up. The guys at the shop told me it would be $49.99, minus 25% due to the sale they are running right now, which I thought wasn't a bad price and so I dropped it off. The guy called me a few hours later and assured me that there is nothing wrong with the bike and that the bike is in excellent condition. He did say that he adjusted the gears a bit and charged me $16 and change (including taxes). I appreciated the quick turnaround, honesty and the savings. Thanks, guys!

So, that's the story in a nutshell. I will put the bike to test over the next couple of days, hopefully ride to work, if I can.

I would like to use this bike as a alternative commuter and for running errands. Let's see what the future holds :)

I would love to hear your thoughts and suggestions on what I should watch out for, which parts you would change if it were up to you, etc.
Paz :)
on October 26, 2011