Vehicular Cycling in Madras/Chennai, India, from many moons ago!

Madras aka Chennai is a famous city in Southern India. I got a masters in Madras and lived there for a few years, worked there, commuted there, etc. I had a lot of fun when I was there. Hence, Madras will always be special to me! I even remember going to a job interview (no suit, but nice shirt and tie) on my bike. I didn't have a car. The choices were: a) ride your bike or b) ride in the very crowded public transportation. I rode whenever I could. I rode to work, the beach, to the movies, etc. It was a lot of miles, in hot, humid, conditions, but it was special and fun.

Recently, a friend of mine sent me an email with photos of Madras, which is 372 years old. Some of these photos show lots of bicycles, like the ones I learned to ride on and rode for a good many years, back in the day. There are some other photos which might interest some of you who might be interested in them from an art/history perspective.

While the traffic and the road conditions look horrendous, believe me, people got around on their bicycles, in spite of all those "bad" things.

So, here are a bunch of photos* of Chennai, from way back when, for your viewing pleasure.

Have a Great Weekend!!

The streets in 1961 in and around Kothawal Chavadi, the city's wholesale vegetable and food produce market founded in 1803 in Black Town, now George Town, were always scenes of congestion created by handcart men, headload carriers and lorry drivers all competing for space during the day. It was only when the market moved to the western suburb of Koyambedu in 1996 that this congestion eased a little. 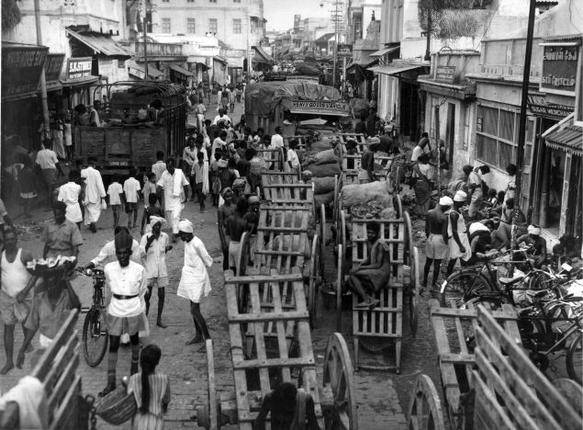 A view of the flyover coming up over Gemini Circle, in July 1972. The landmark construction has stood the test of time in traffic planning. 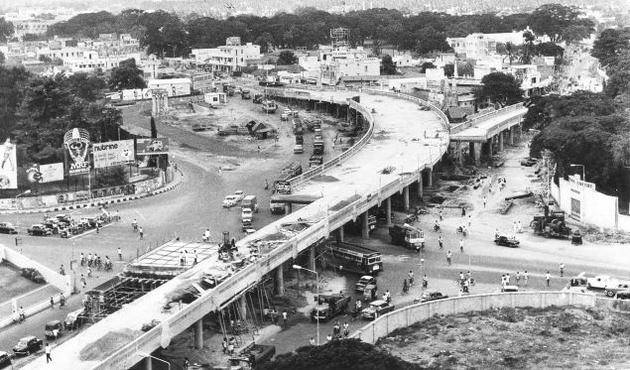 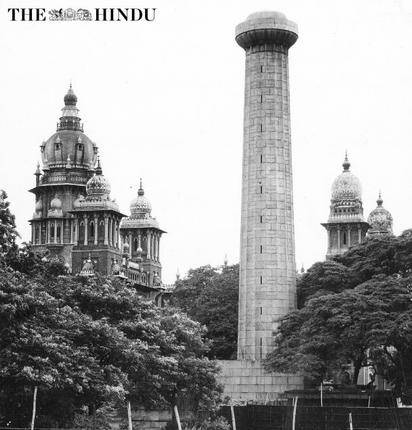 Dr. A.V. Rajagopal’s house and clinic replaced Raghunatha Rao’s Krishna Vilas on West Mada Street (R.K. Mutt Road now) where national leaders met in December 1884 to discuss the formation of a national movement to seek freedom from the British. The discussions here and at Ranga Vilas in Egmore led to the formation of the Indian National Congress in 1885. That first discussion was marked with a plaque that long remained in Dr. Rajagopal’s clinic, but, sadly, vanished when the building was pulled down in the 1970s. 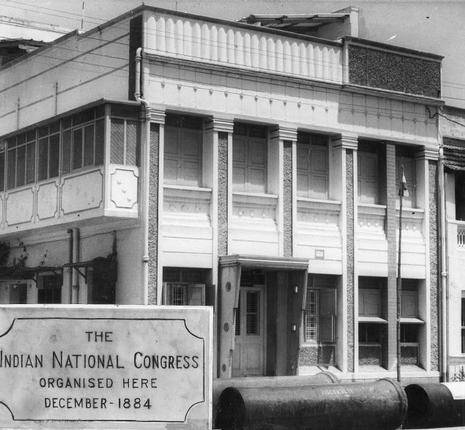 A panoramic view of Marina Beach on an evening.

This automatic, electrically-operated traffic signal at a junction in Egmore, photographed in September, 1953, is probably the first automatic traffic signal in south India. 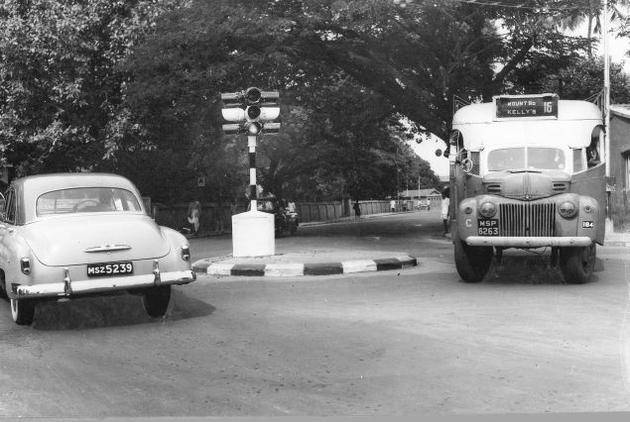 The caption accompanying this archival photograph, describes "a traffic jam” on the Mount Road-Blacker’s Road crossing. 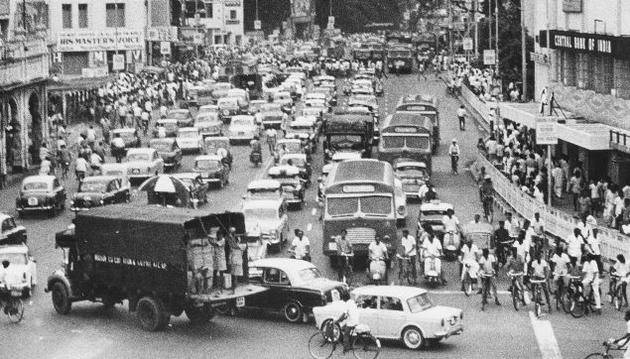 A massive crowd surging towards Rajaji Hall to pay its last respects to departed Congress leader K. Kamaraj on October 3, 1975. 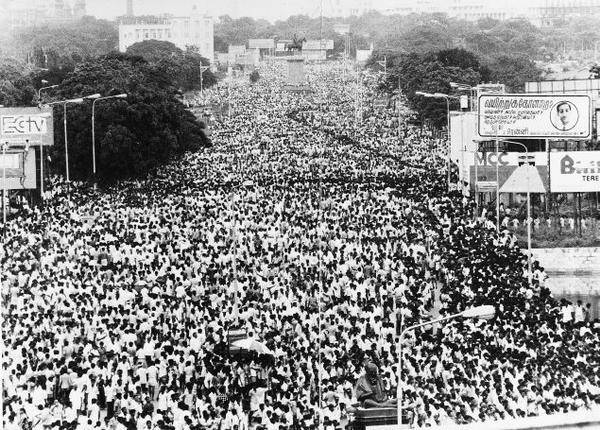 Hundreds of workers manually clear the river bed of the Cooum near Willingdon Bridge in 1971, during one of the many phases of the Cooum Improvement Scheme. 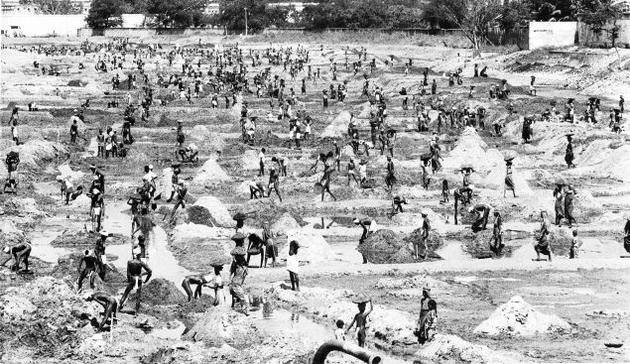 Horse-drawn jutkas were still part of the public transport scene in Madras in 1979, especially opposite Central Station. 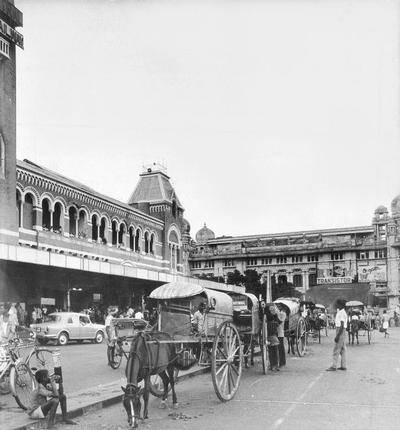 A bird’s eye view of Park Town’s pride – from left to right - Sydenham’s Road, Ripon Building – headquarters of the Corporation of Madras built in 1913, Victoria Public Hall built in 1887 and Moore Market built in 1887. Behind these majestic buildings sprawls a lake with the South India Athletic Association’s ground beyond, boasting of the Moore Pavilion, seen at the top right of the picture. 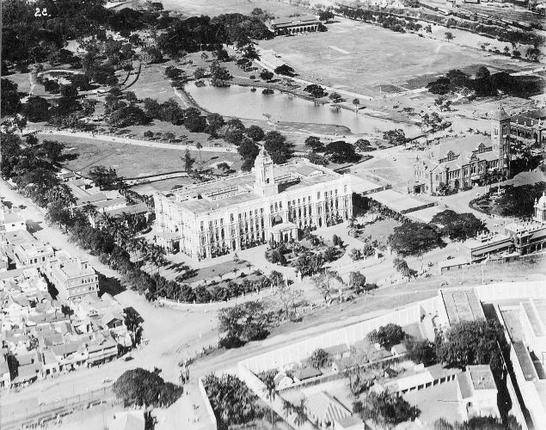 Spencer’s majestic building was still there – in the background – in 1976, watching over an increasing flow of public transport, but minimal private transport on Mount Road. 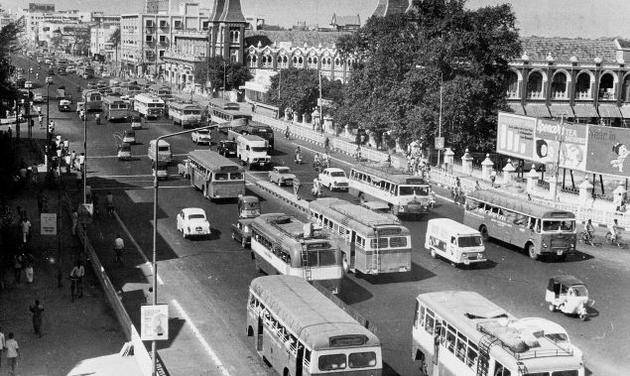 Netaji Subhas Chandra Bose Road, formerly Esplanade Road in 1961, with the open Esplanade having been where the High Court buildings (on left) came up. It was a pleasure indeed to drive a car then, especially the stylish Morris Minor (in the foreground), on the wide, empty roads flanked by majestic buildings still standing today. 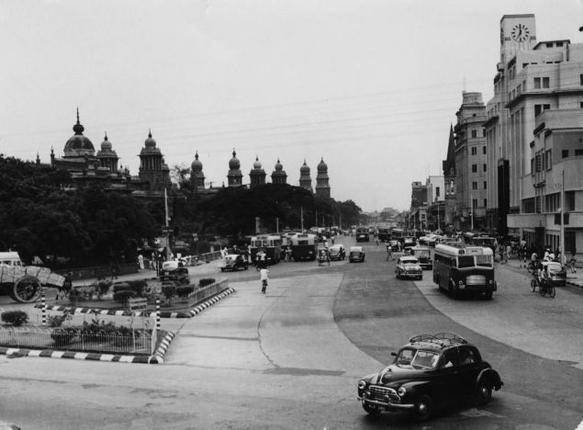 *Photos courtesy of The Hindu newspaper.
on October 15, 2011