Scenes from the first Car-Free Streets Festival in Fort Worth, Texas!

Below are some photos (minimal commentary) from the First Car-Free Streets Festival in Fort Worth!

I rode the TRE from South Irving to Fort Worth.

It is just as easy to carry coffee in the water bottle holder of the Bromtpon T-Bag! 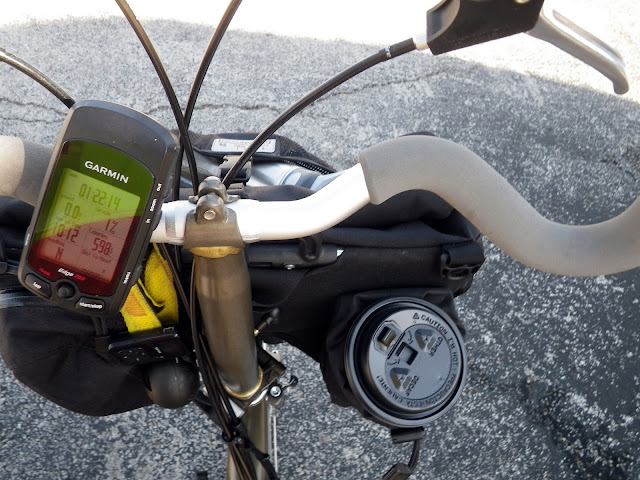 I ran into another bicycle commuter on the TRE. This guy wasn't going to the festival as I was, but was headed to work. He had a decent ride, a Marin, with disc brakes, mudguard and all. 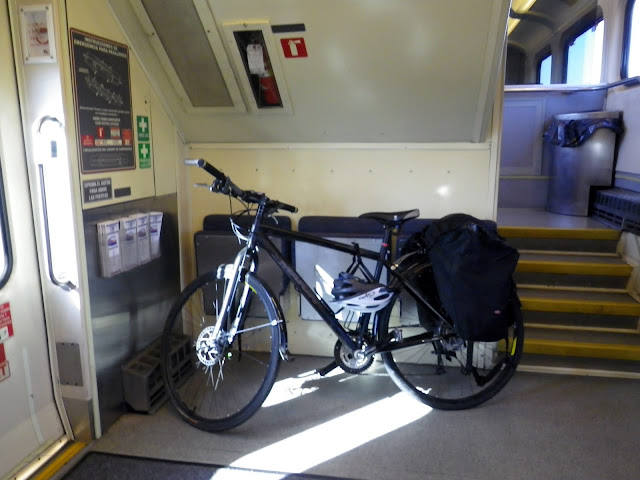 I saw a some bikes at different stations. 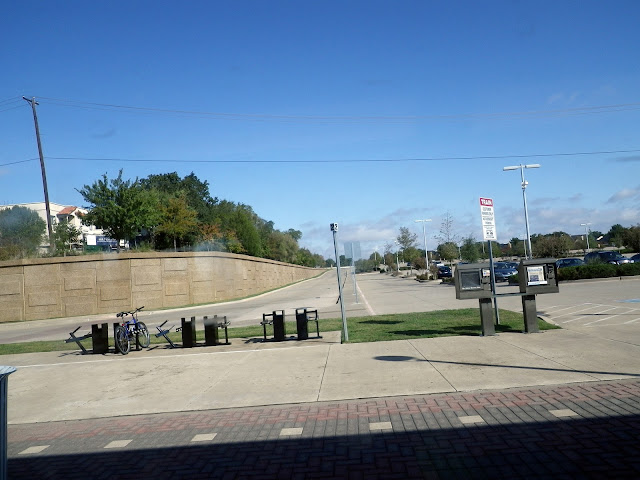 The T-bus that runs on Natural Gas! I wanted to take a photo through the open door of the train, but the cigarette smoke on the platform got to me :( 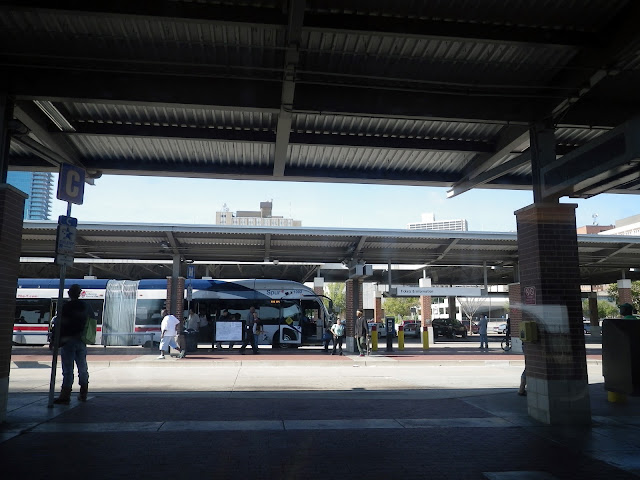 Possibly, the world's largest ceiling fan? :) I found this at the T&P station in Fort Worth. I was a bit bothered to see ash trays at each of the tables though. So, was the fan there to disperse the yucky smoke or was it there to keep the people cool? I can't believe they allow smoking in public places, still :( 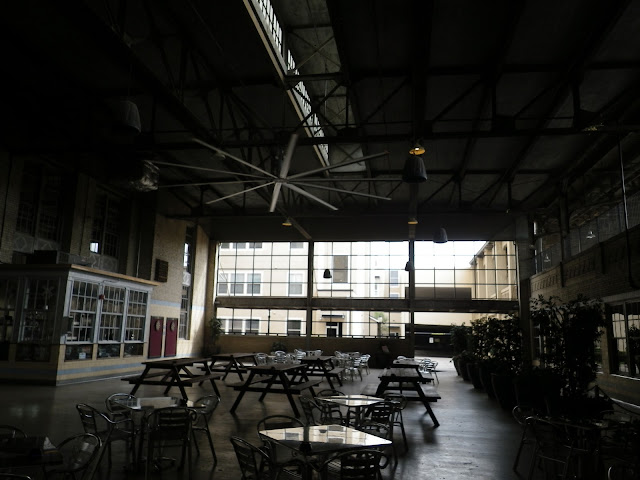 More bikes, locked-up at the TRE station! To me, the red Cannondale looks more securely locked-up than the scooter. 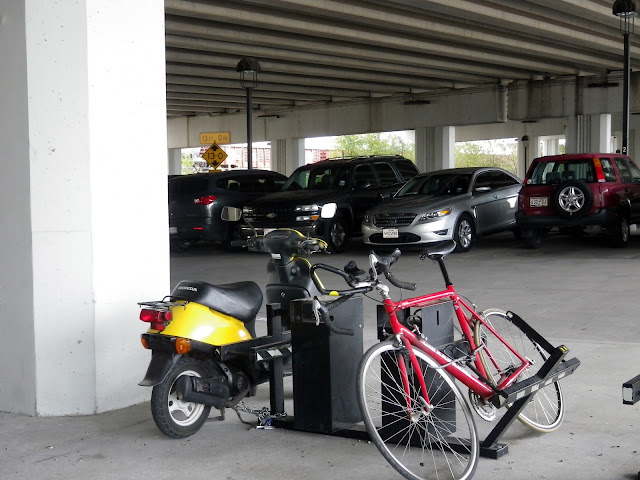 I rode from the T&P station to Magnolia Avenue, where the festival was. The roads were more or less deserted, quite possibly because of the festival and the street closures! 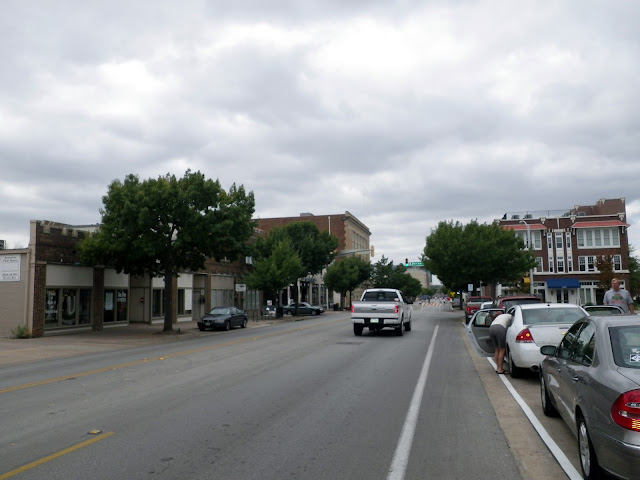 I stopped by a side street, where there was Kids Bike Rodeo. I chatted with Nicky Stevens (Trinity Bicycles), who was conducting the event. There were a bunch of kids, including a couple of Nicky's, riding around in that area. 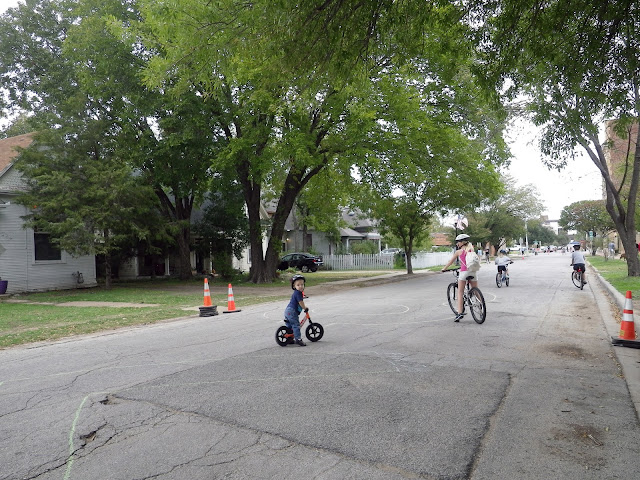 Here is Nicky, with his adorable child! 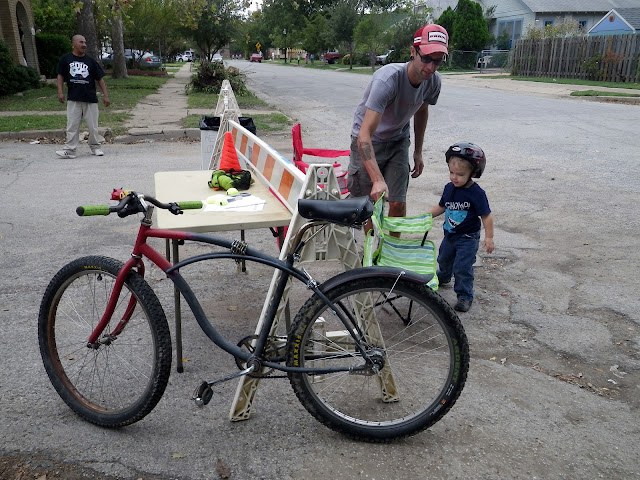 As you can tell, Brahma went to the festival with me :) 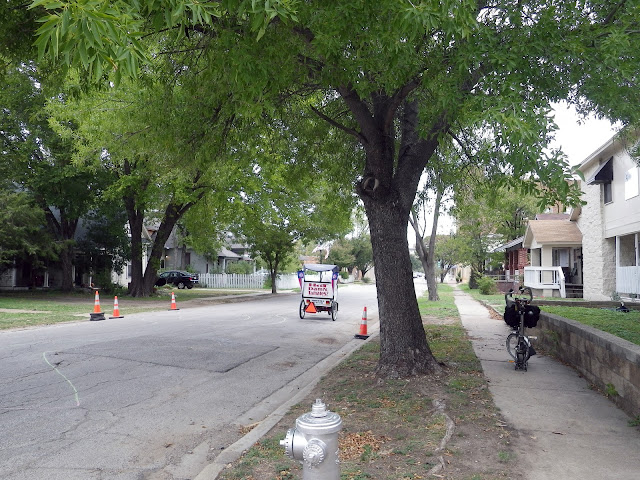 There was live music at the festival. Live and it was played by a cyclist, who hauled the equipment on his bike. Yay! 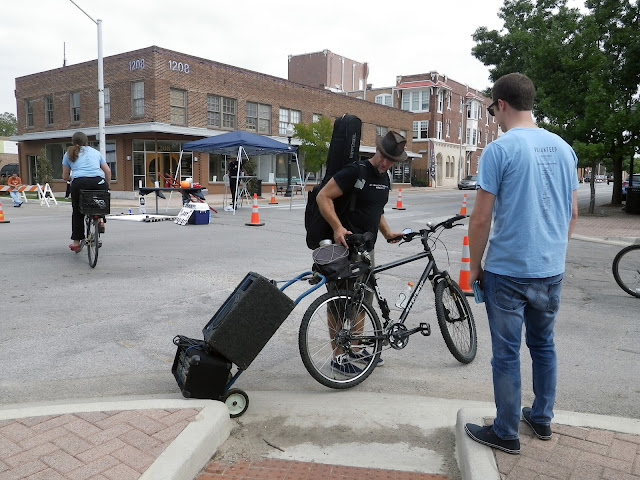 There were a bunch of booths, promoting different stuff. Here you can see the infamous "Water Booth"! 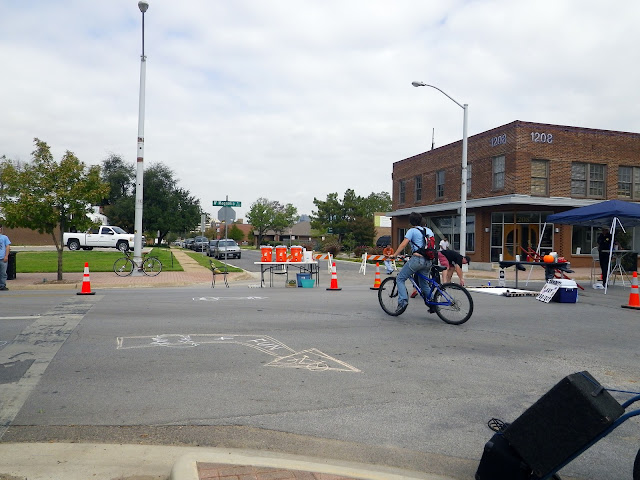 Right next to the "Water Booth", was the Jenga Booth. Man - this thing was ginormous and looked totally fun! 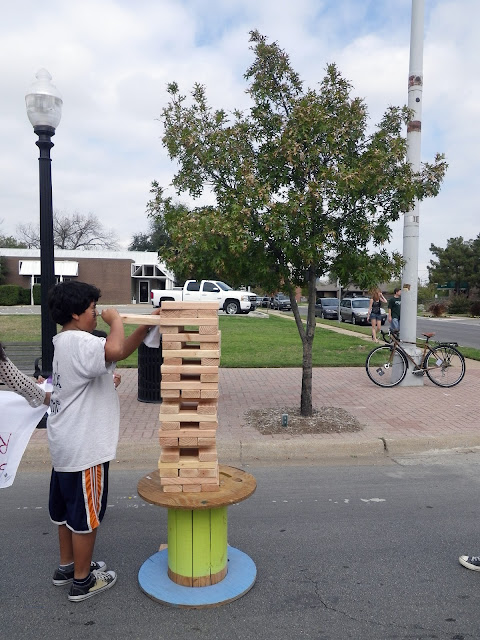 I met Christina of Bike Friendly Arlington and her cool Surly. The Surly was a practical, well-equipped bike! 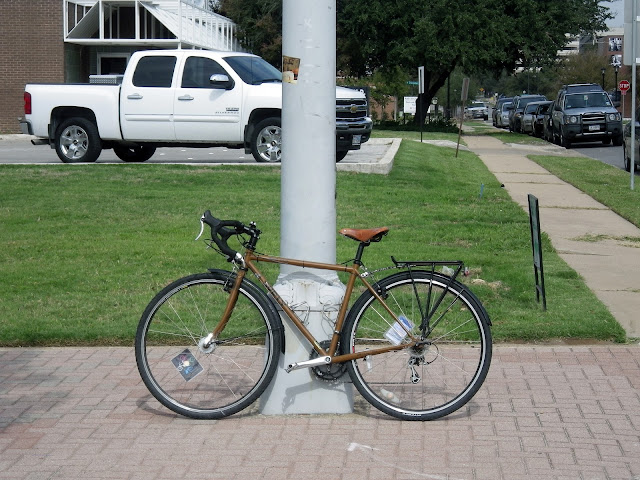 I call this Moi Monet :) The blue wheel and the turf were added by someone else. 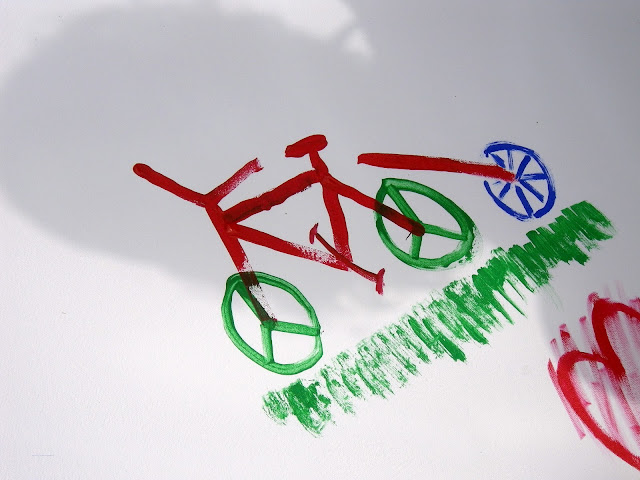 Cool Barber Shop and a nice street light to go with it! 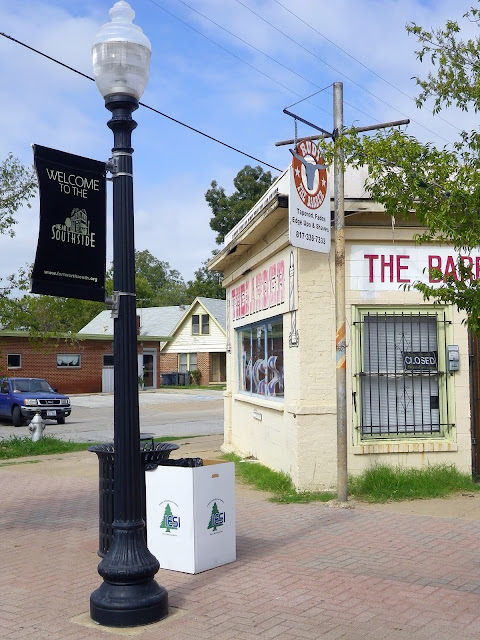 Pedicab - yowza! Now, if only they spelled my name correctly ... :) 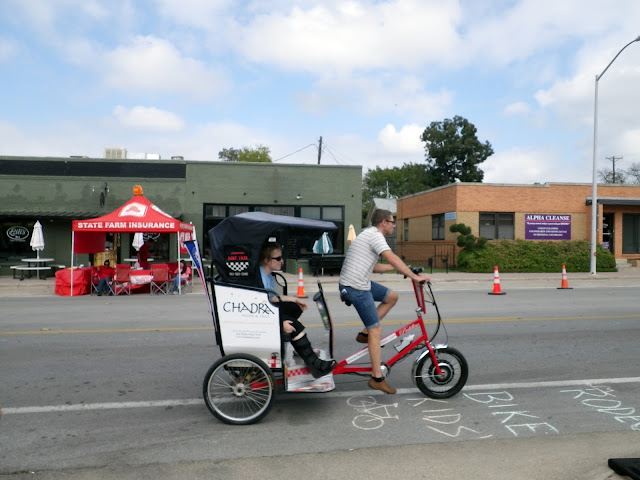 Quite possibly, the coolest tandem I saw that day! 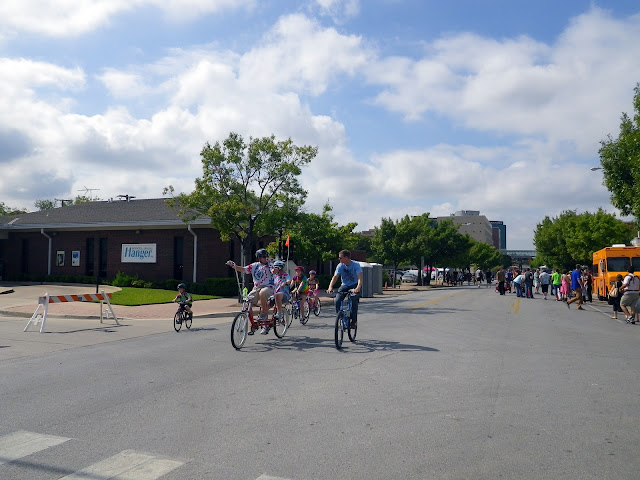 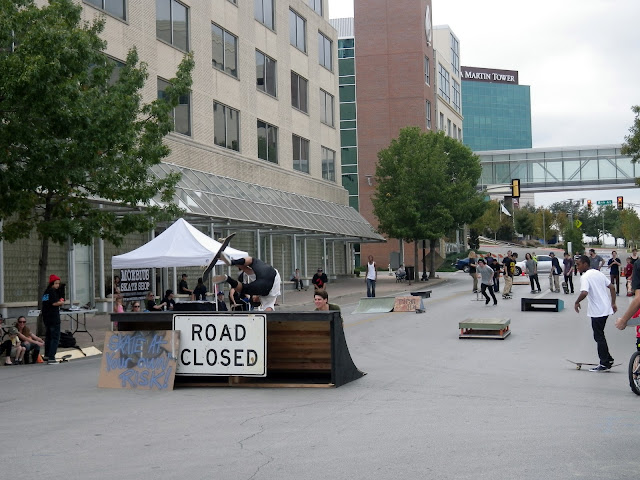 Cyclists do get hungry! 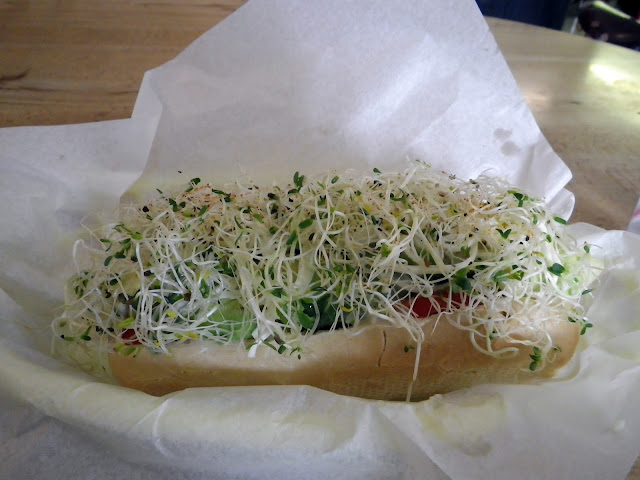 I forget the name of the establishment, but you got the door # and it is on Magnolia Ave! This guy has good eats and he asked me to bring my bike in. Need I say more? 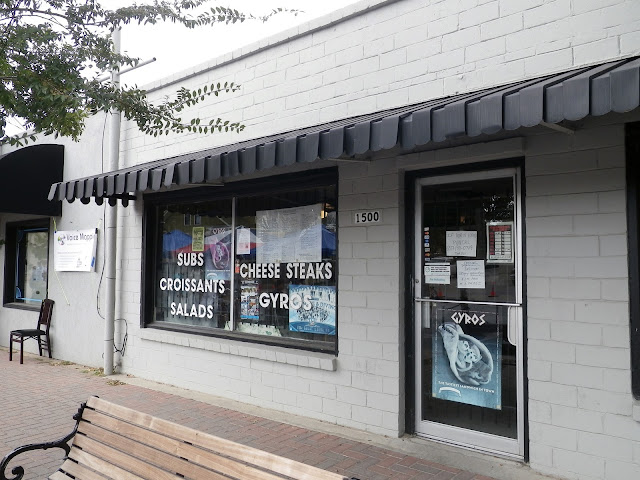 Close-up of the cool tandem! 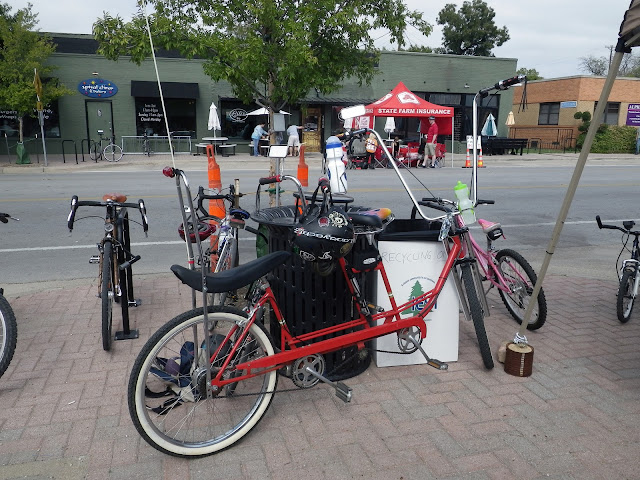 Got some yoga and some Beatles to go with it...good vibes y'all! 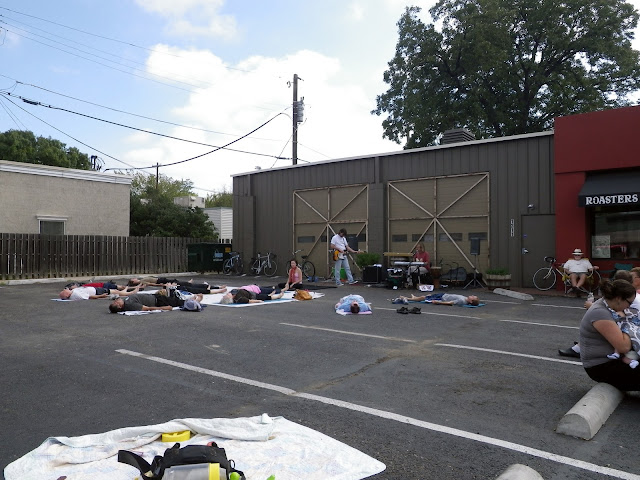