View 1.0: Street scene from Place de Vosges - Marais - Paris, France!
Victor Hugo lived in an apartment in the building seen straight ahead (the one with the brown paint).

Notice the abundance of scooters? Lots of people drive scooters in Paris. They seem to go quite fast, but they are quite noisy.

You may also notice the one bicycle at locked to a post on the sidewalk a little ways down the street. Like many of the other bicycles I saw in Paris, this too was a practical bicycle. Not one to race, but to get around town. 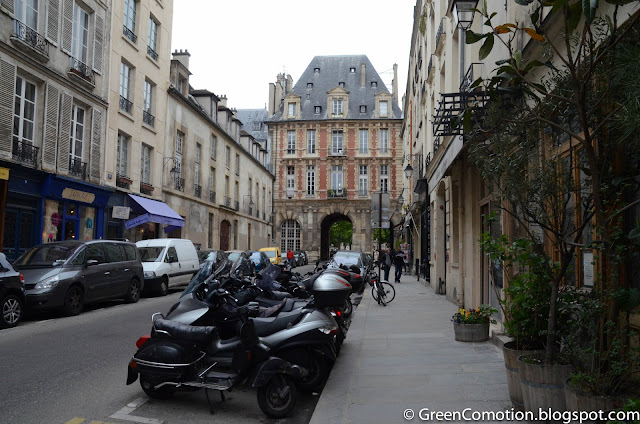 View 1.1: Place de Vosges - Paris, France
When you get closer, you notice that the bicycle is in fact looked to a street sign that designates the area to be legal for parking bicycles and scooters. Vespas were what the chic commuters rode. 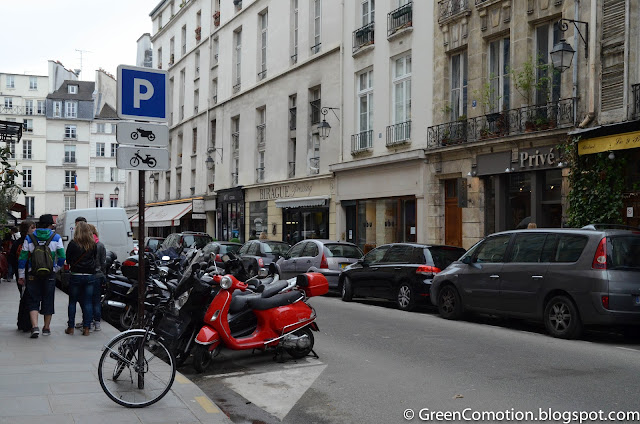 You don't have to be a superstar or someone with accolades from any particular cycling school to ride your bike here. I doubt many of them have taken classes like I and some other bloggers like Steve. Many of these cyclists, IMHO, ride sensibly. Their bicycles are anything but fancy. But, they sure are functional! They do have the "bells and whistles" that matter, like mudguards that keep your clothes devoid of road grime, lights in the front and the back that light up without human intervention (sensor operated), pannier racks and handlebar basket for carrying stuff. These are not the 15 LB carbon fiber, SPD pedal equipped speed machines. No, sir/madam, they are not! But they are practical, utilitarian bikes, that will get you from place to place, in a reasonable amount of time. 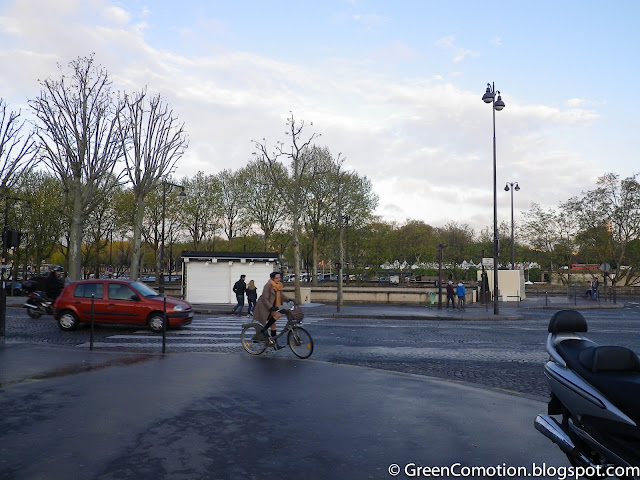 The bicycle pictured above is a VELIB bicycle, which one can rent in Paris. I rented one during my stay, just to check them out. They are good bicycles. They are great for the intended purpose: commuting NOT racing! This photos was taken cross the street from The Eiffel Tower. Busy intersection, but not too busy to accommodate Paris's cycle commuters.

Have a Great Week!!