As I mentioned in my last post, my wife and I had the fortune of going to a really great place for my Rest and Relaxation. We went on a vacation to Paris, France.

We got to breathe in the culture, feel it, smell it and live it for a few days. We stayed in the City of Paris and I/we was/were able to see how Parisians go about their business: both in terms of cycling and in terms of other walks of life.

I have decided that I will post what I photographed in Paris through several posts. This is post # un!

The collection of pictures in this post were all taken right on the street where we stayed or within 100-200 meters from the door to our hotel. I was indeed looking for a co-mingling of automobiles, bicycles, along with other other self-propelled vehicles and pedestrians. There was plenty of that, alright! The scenes I have presented hopefully reflect my sentiments. 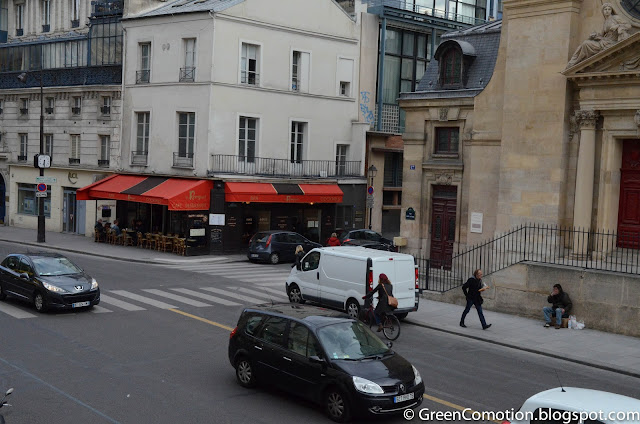 View # 2:
Photograph was taken from my hotel window. Time of day: Around 6 PM, Paris time.
Notice the skateboarder in the bike lane? :) Curious eyes will also notice the scooter parked on the sidewalk and the two wheels of the white van parked up on the curb! I saw automobiles' with wheels up on the curb in many places. 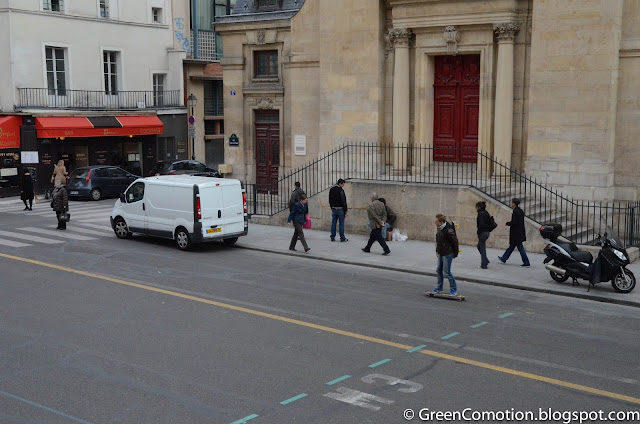 View # 3:
Bicycles parked across from the bank near the Bastille Metro station.
Most bicycles, you will notice, have lights, mudguards and racks on them. Many also featured a bottle or a hub dynamo. I am a big fan of riding comfortably, with the necessary amenities. I found these bicycles practical. 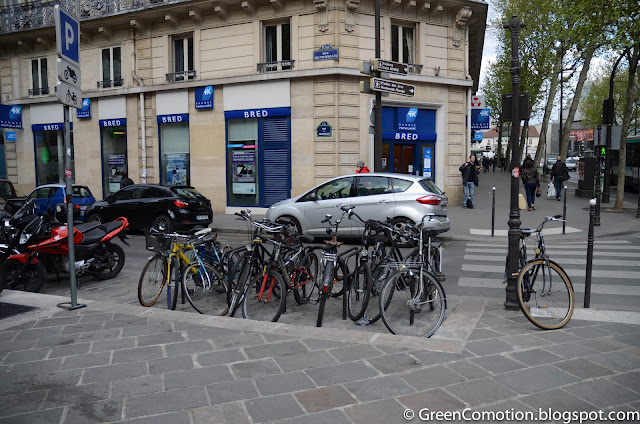 View # 4:
Bicycles parked near Bastille Metro.
Notice the parking area is exclusively for bicycles and motorcycles, as indicated by the blue parking sign. Many of the bicycles were Peugeot or Gitane. There were a few other brands as well, but many were French brands. 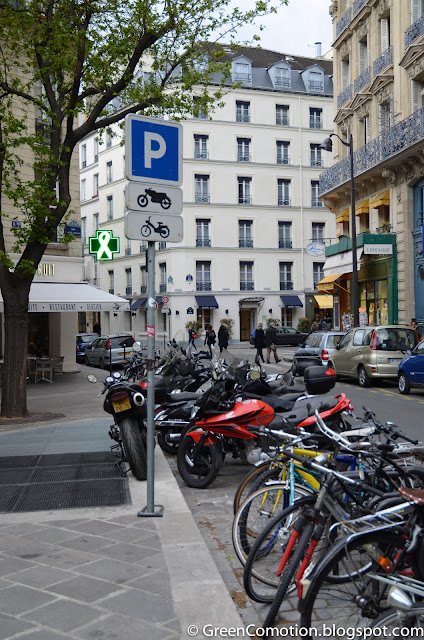 View # 5:
Shops across the street from our hotel.
Notice the security-conscious bicyclist's bike :)
I noticed several bikes parked with panniers still on them. I can't say I have done that EVER in the States, unless I am on a bike tour.
By the way, the Kooples store had some really nice, fashionable clothing!

And, the little street next to the Boulangerie leads to one my favorite vegetarian restaurants in Paris - Cafe Ginger! 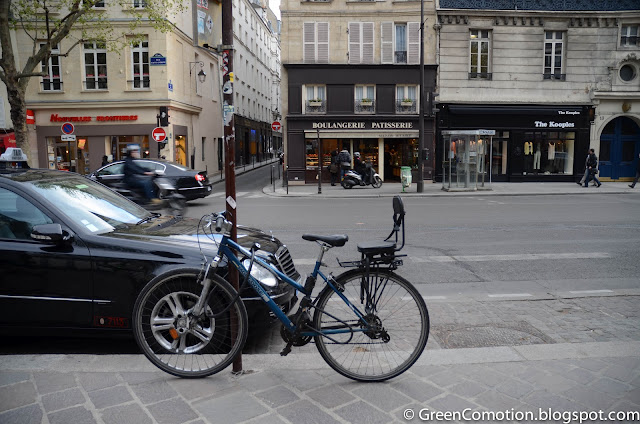 View # 6:
Establishments across the street from the hotel.
Notice the cyclist with the bag? Some cyclists did not only carry things on their bike racks, but also carried other bags on their shoulders, backs etc. Here is one such a cyclist. He wasn't in the minority, let me assure you! 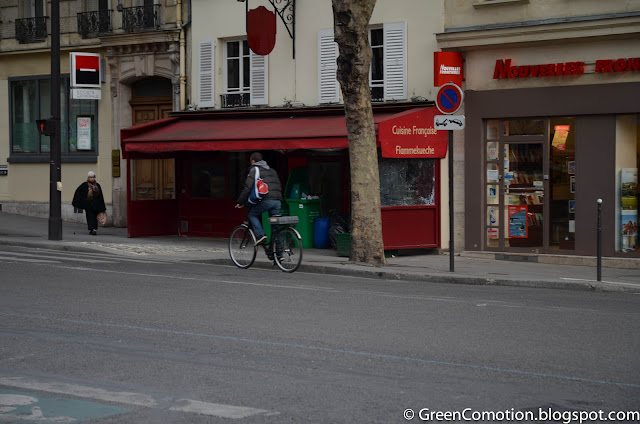 View # 7:
Sometimes you need someone big watching over your bike! Seen near the Boulevard de la Bastille! 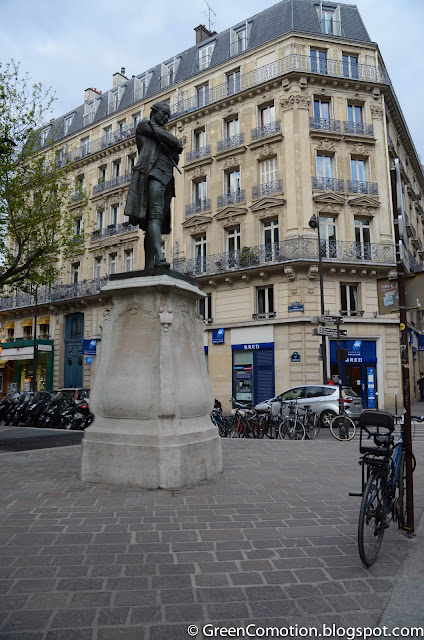 View # 8:
rue Saint-Antoine, Paris. Right across from the hotel!
Notice the cyclist wearing reflective vest? I saw a few like that. Mostly, I saw cyclists wearing these vests in the evening. I use one all the time. However, as you will see in a future post, that I did not take my gear to Paris :)
Notice also that the silver car is parked in the bike lane and that the cyclist is riding on the street with the other vehicles. No fuss! 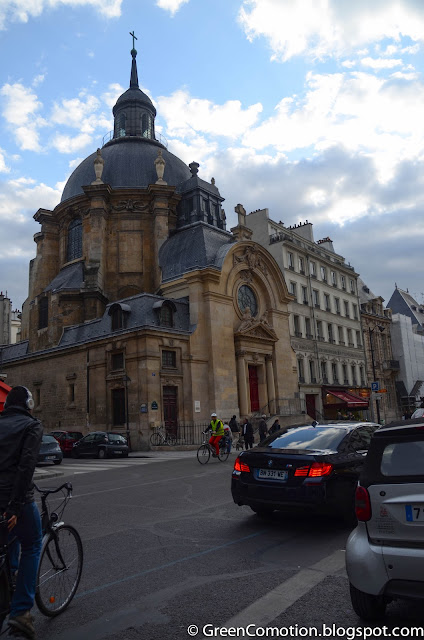 View # 9:
Church across from our hotel!
Nothing fancy, but I liked the building. It was classy, not jazzy!
Notice the bicycle locked to the metal railing? It was there every day we were in Paris; same spot. It never moved. I wondered if it had been abandoned or if it belonged to someone who worked at the church, who got there bright and early and left very late at night. 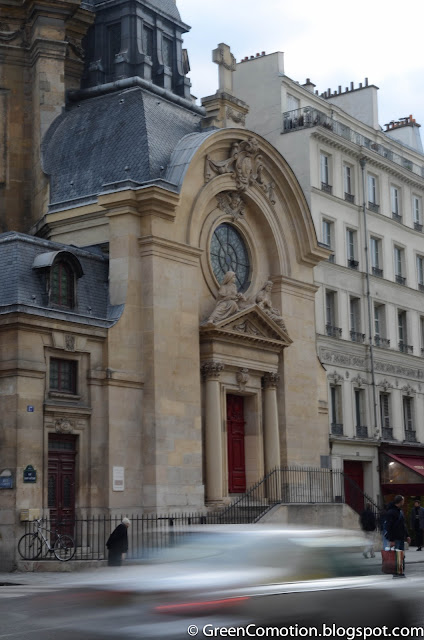 View # 9:
View from outside the gas station next to the hotel.
The green sign on the left says, Sans Plomb = Lead free = Unleaded! Trevor was right - gas prices in Paris were higher. I am certain that they are higher in UK as well! Notice the cyclists's rear light is lit? It is lit because of the built-in sensor telling the lighting system that it is dark enough to turn on automatically. A great feature to have. Most modern dynamo lights have this feature, including the ones I have on my bikes, which are made by Busch-Mueller! 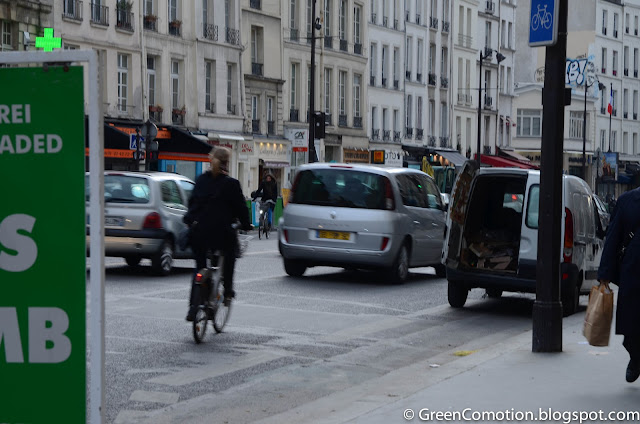 That's all for this post.
There will be several more coming soon.

I haven't seen so many bikes elsewhere, with the exception of India. But that was a long time ago and the traffic there was chaotic.

Paris filled my heart with love for life, food, cycling, life, arts and freedom. I think I will continue my search for ways to spread love and peace; perhaps while exploring the many avenues leading to more harmony in my life and the lives of others, on a bicycle?