The deer pictured here is the original deer that adorned one of the columns at the intersection of Tower Grove and Magnolia Avenues; Tower Grove avenue runs through Tower Grove Park in St. Louis, Missouri.

I believe it was a late Fall day, when I took this photograph. I had walked by this deer so many times before, but it never occurred to me that I should stop and take a close look at the majesty of the statue. But, for some reason, I did on this day.

Whoda thunked? There was a violent storm that evening and the deer fell off the column and broke. It was subsequently replaced by a new statue. I never thought it was quite the same as the original one. 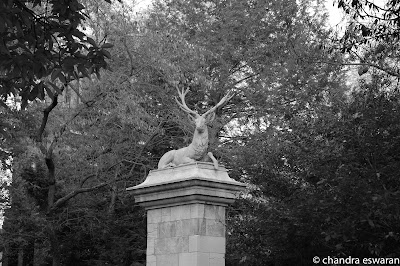 When I was in High School, we read quite a few great pieces of English literature. I don't think of them all the time. But after writing this post, for some reason, I am reminded of G. K. Chesterton's The Advantages of Having One Leg.

Perhaps, it is about becoming solitary!