Many of my readers may remember that I have a Schlumpf Speed Drive on Brompton, Brahma. Since I got this very advanced gearing system installed, I never had to even think about it. It always worked like a charm.

Recently, in the last month or so, I noticed that when I climb the two big (big for me) hills near my home, which measure about 18% or more on my Garmin, at the very top of the hill, as I am struggling to make it up the hill, the Schlumpf would slip. The combination of gears that got me up these hills is the lowest in the Schlumpf, SA BWR 3-speed and the lowest gear in the 2 external gears on Brahma. Brahma was built as a 6-speed (in the rear) Brompton P-Type with the Schlumpf Speed Drive in the front.

Knowing Schlumpf's reputation for bullet-proof engineering, I didn't worry about this much, but it was nevertheless bothersome, especially given I could lose my balance and crash, because of the instability brought about by the slipping of the Schlumpf.
So, it was time to dig out the Schlumpf manual and read-up.
The first thing that I noticed was that it was a good time to lube my Schlumpf. The picture below gives instructions for the same. 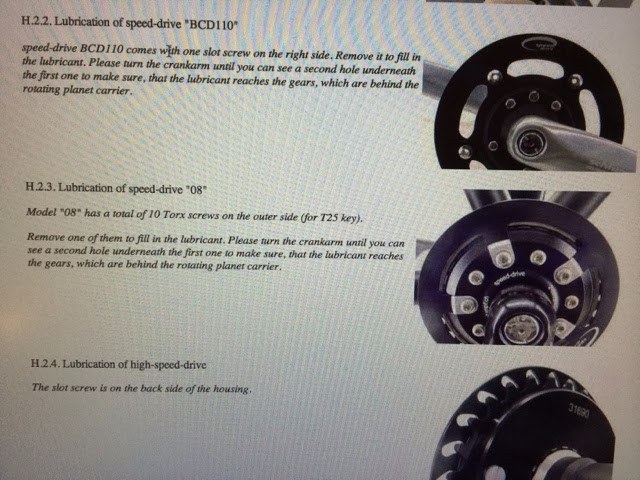 My Schlumpf Speed Drive is the version 08, for which one would need the instructions in H.2.3 in the picture above.
So, I hurried up and used my torx head to remove one of the 10 Torx screws on my Schlumpf. 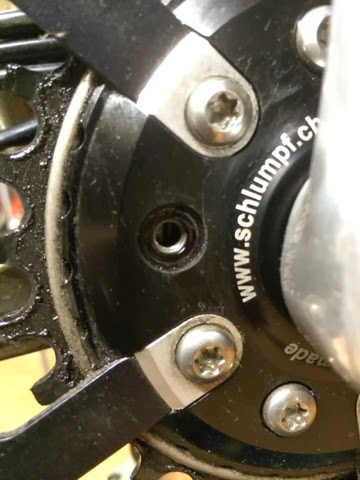 Next, I rotated the Schlumpf crank arms, such that I could align the Torx screw slot with the Schlumpf drive's oil port. 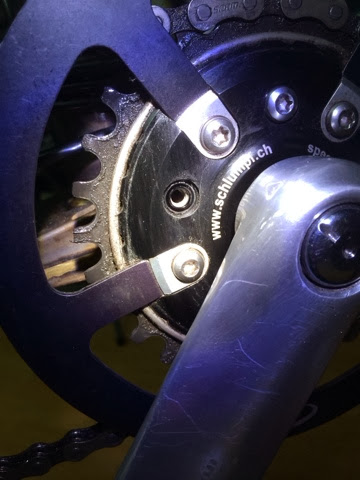 That was relatively easy. I only tightened the Torx screw slightly when I put it back. Schlumpf has specific recommendations on how much torque to put on the screw, in Newton Meter units. I am planning to buy a Torx driver set soon, just so I can have one handy.
Unfortunately, lubing the Schlumpf did not solve my problem. The Schlumpf still slipped, under load, every time I climbed the two big hills.

This afternoon, I decided it is time to get to the bottom of things. So, I started my 3 stage troubleshooting process. My plan was as follows:

Item # 3 in the list above is a very important step. Schlumpf recommend that you do not adjust the settings too much, especially if you do not understand how the Schlumpf works thoroughly. I don't claim to understand the inner workings of the Schlumpf in its entirety.
I did check the SA hub and it didn't need any adjustments.
Next was the chain on Brahma, which I replaced roughly a year ago, when I was in Dallas. I wrote about my experiences here and here.
When I checked the chain on Brahma, I was surprised to find that it had at least 75% wear on it. I checked the wear on a few links, before deciding it might be time to change it. However, I didn't think this was the problem, but I wanted to get a second opinion from a professional bike mechanic. 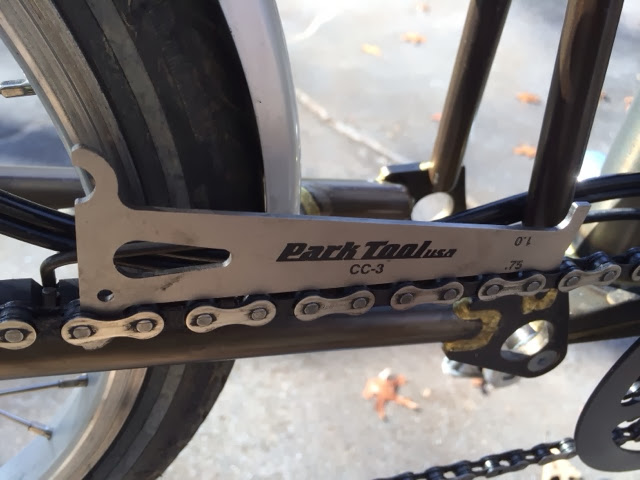 So, I called the bike shop at Perimeter REI. I talked to a newer tech, by the name of Ben, who sounded very confident and logical (both are very important in my book). He too thought that chain-wear may not alleviate the problem.

Anyways, I got in the Chevy and headed over to REI. Shortly, I met Ben. When we examined the Schlumpf together, Ben pointed out to me that there was some side-play in the Schlumpf, which was easy to adjust. Ben simply followed the instructions in the Schlumpf manual got it done**. Once the side-play was eliminated, I requested Ben to change the chain also. Luckily, REI had a 7/8 SRAM chain, which Ben assured me was equivalent to the 3/32 chain that was on Brahma. So, Brahma got a new chain as well.
**The adjustment needed to remove the side-play was the tightening of the part next to the bottom bracket on the non-drive side; this part is called a lock-out mechanism. 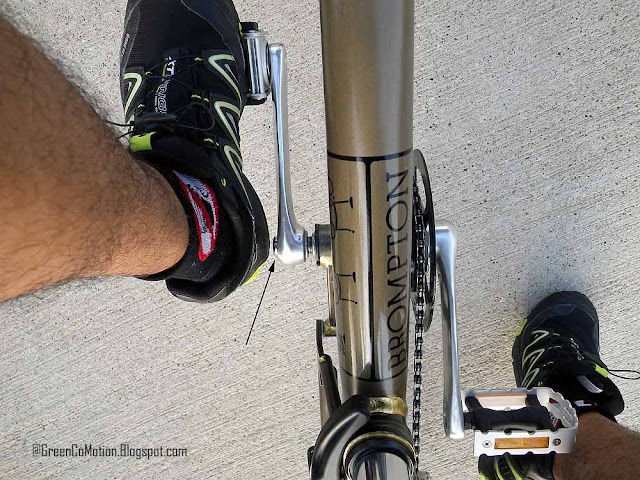 After the installation of the chain and the adjustments need to remove the side-play, Ben test rode Brahma and gave it a clean bill of health. I drove back home, after perusing the merchandise at REI. I even bought myself a little holiday gift, which I posted about here.

After I got home, I took Brahma for a test ride. I rode a short bit on a fairly flat road and then rode downhill to the bottom of the hill at Martins Road. From there, I rode up the hill, twice, in the same gear combination which would make the Schlumpf slip. Thank Goodness, no slippage. Phew!

I am hoping that the problem has been solved or as Clouseau would say, "Sol-ved" :)

I am very happy that I went to see a trusty professional mechanic.

PS. All along this process, Channell Wasson at Foldabikes, has been very helpful, by providing tips on troubleshooting. Thanks, Channell!

PPS. I found one of the Torx screws in the Schlumpf stripped. I know I did not strip the screw, by over tightening it, accidentally. The screw I removed to add lube, was not the one holding the trouser-guard in place. It must have happened, quite possibly when the unit was put together. I have found a temporary fix; replaced the stripped Torx screw with one from REI. The replacement does not match the color of the original and it is not of the same length; so, I have used a few washers to make it work for now. I plan to contact Foldabikes and Schlumpf Innovations and see if I can get a replacement. Hopefully, I can get a replacement from Schlumpf or Foldabikes.
on November 30, 2013