As you may all know, we had a winter storm in Atlanta, GA. Not much snow, but because of lack of planning (IMHO), 2 inches of snow, became a nightmare.
I left work around 1 PM on Tuesday, 1/28/2014, and made it to my home around 6 PM or so, on Wednesday, 1/29/2014; roughly, 30 hours later. I stayed Tuesday night in a motel in Doraville, which is about 8 miles or so from work.
This post is about my experience.
Photo below shows the conditions when I left to go the MARTA station on Tuesday. 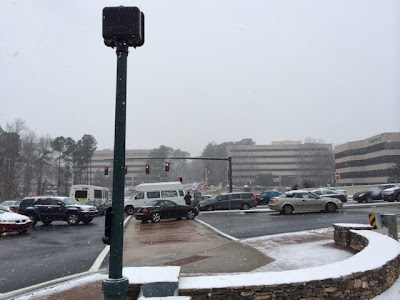 It wasn't worth fighting the insane traffic, to ride the mile from work to Medical Center MARTA Station. So, I simply walked. Picture below shows the conditions at the MARTA station. What you don't see is the large number of people waiting on both Northbound and Southbound platforms. 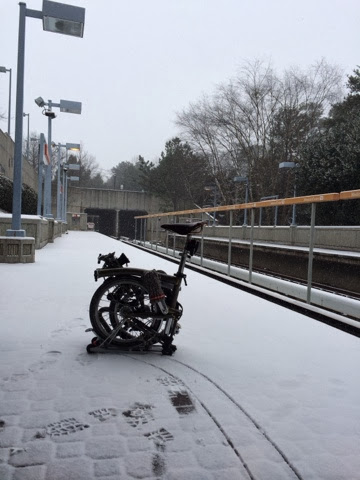 Next, I managed to squeeze into a train that took me to the North Springs Station, where I waited for about 3.5 hours, in vain, for Bus # 185. MARTA did not announce that they will not have bus service; not even once!

After that long wait, I figured I would at least go someplace warm, boarded the Southbound train and went back to work. I got back to my office around 6:30 PM, roughly 5.5 hours after leaving to go home. My manager found me a hotel room in Doraville and drove me there. I stayed the night in the motel.

I was fortunate enough to meet a group of 3 other people, at the motel, one of whom found a taxi, that would take us to our respective destinations, on Wednesday around noon. I traveled for about 4 hours and the taxi dropped me off about 3 miles from my home in Roswell.

I hiked the rest of my way, up slippery slopes and reached home around 6 PM. I am happy I made it home in one piece.
Pictures below are from my neighborhood, some taken while I was walking and some from the taxicab. 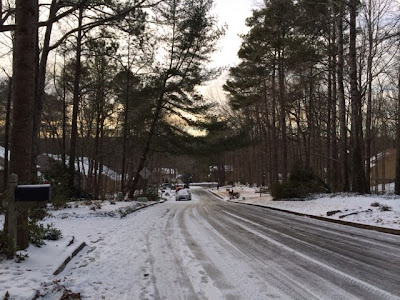 It was easy to walk where there was enough powder, but not so easy otherwise. 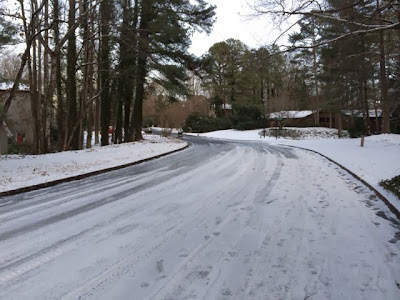 Frozen patches and many vehicles were parked close to the entrance to the road. Many homes have sloping driveways here and making it back up the hill wasn't an option, for most. 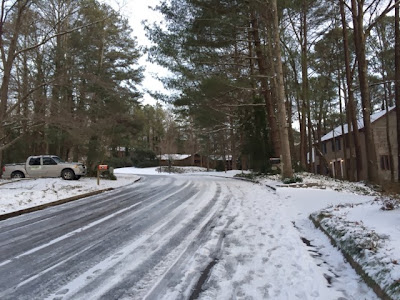 View of Martins Lake in the distance and the frozen street. 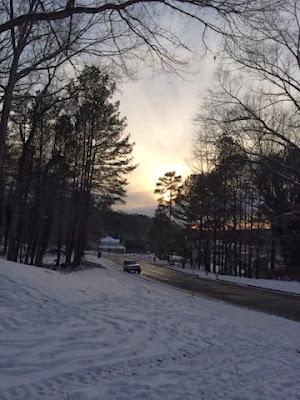 I may not have enjoyed riding down/up this hill, on this particular day. Stopping may have become an issue :) 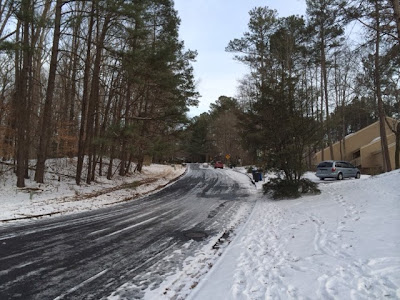 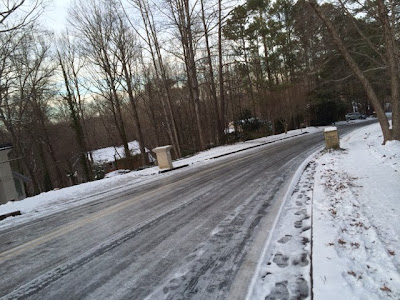 Like a sheet of glass...nice and slippery, although not too thick of a layer. 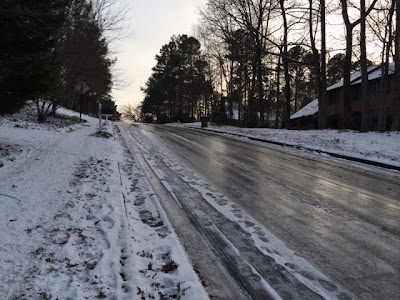 A close-up of the iced road, just for your viewing pleasure. 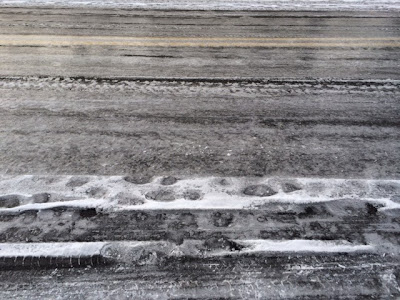 Abandoned vehicles, some on the road, some off to the side and some in between. 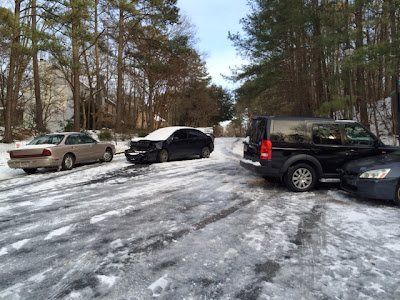 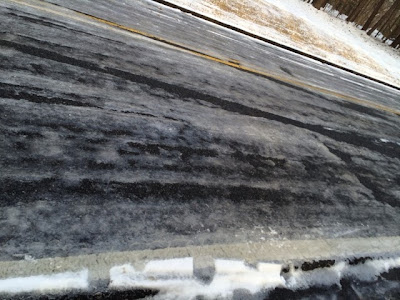 Cor-waste? View from inside the taxicab. 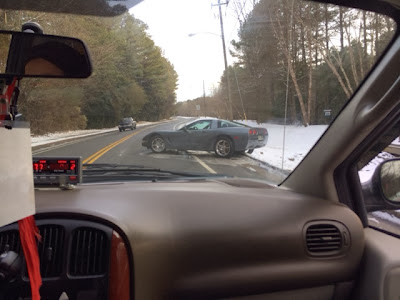 Some people decided to grab their belongings, leave the car parked and walk to their destination. 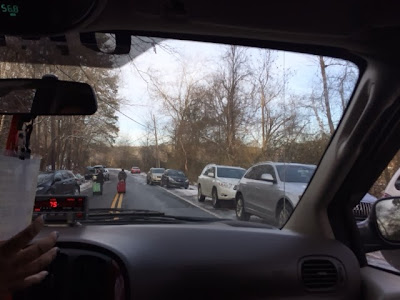 Hairy curve, near Wileo Road. This picture only tells part of the story. It was actually worse than conveyed by this picture, believe me! 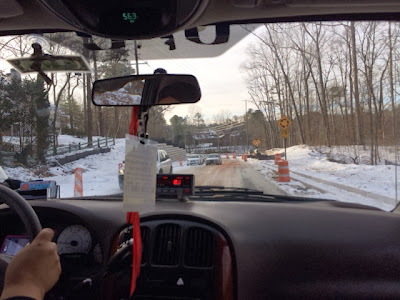 Last, but not the least, here is one picture that summarizes the chaos. Picture from yesterday evening; complements of Martins Landing Foundation. 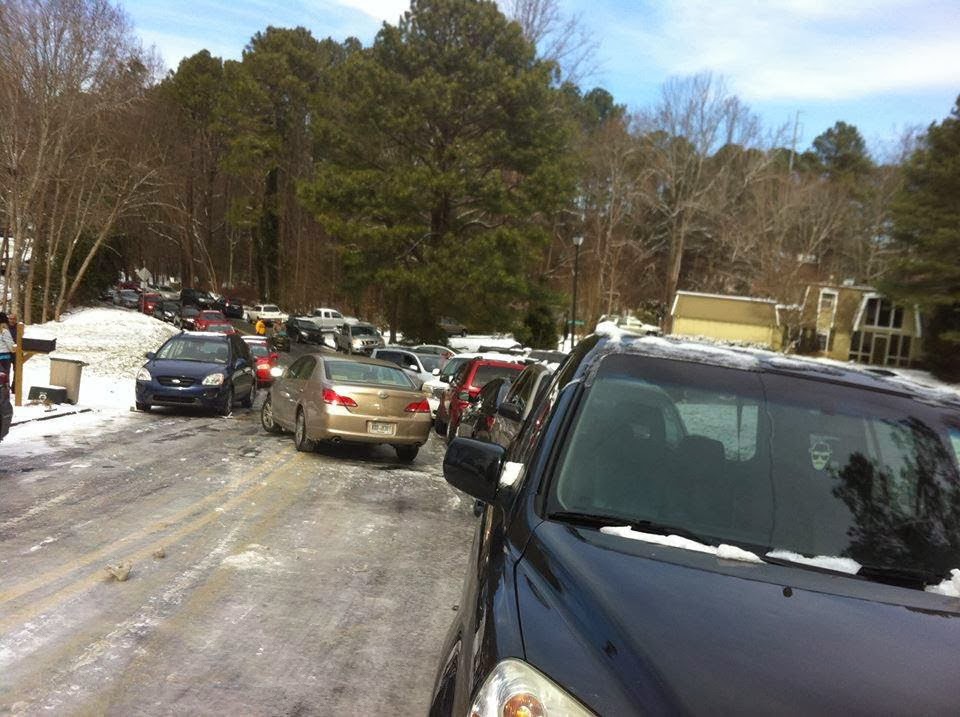 Many of my friends and colleagues in Atlanta suffered as much, and some more. I hope all Atlantans who suffered through this chaos are safe and well.
Please don't get me wrong. This ain't the worst disaster in the world. People who have been victims of Tsunamis, Earthquakes, etc., go through very difficult conditions.
The point behind this post is to share with you, my experience and some photographs of the chaos. Period!
Be Happy!
Peace :)
on January 30, 2014 No comments:

Weather for the rest of this evening and tomorrow.
No wonder this topic wasn't brought up during my job interview :)

The Marmot Randonee is getting some use today and tomorrow, shall we say? Although, I didn't ride much today, especially in the PM. More about that in a future post.
Be Happy!
Peace :)
on January 28, 2014 No comments: